Feature: Pinkshift - 'i’m gonna tell my therapist on you'

Baltimore-based rock band, Pinkshift, are ready to drop their latest single, i’m gonna tell my therapist on you. In preparation of their debut EP, the tune aims to present their raw energy and angst that fuels their blend of 90s punk-rock and pop-rock.

Discussing the idea of frustrations in dealing with a lack of societal cares for mental health services, the tune immediately gives off anger and passion in every aspect from the vocals the instrumentation. With people often being quick to throw around adjectives like, “crazy”, and OCD seemingly being used as a quirky attribute, mental health matters are often underacknowledged which is inevitably frustrating for those suffering from these issues. Even when help is provided, the song goes on to describe a feeling of being ignored anyway and so using this song to claim back their voice and their power, and their listeners, against all of these restraints.

Combining kick-ass drum beats and guitar riffs and the vocals of Ashrita the track creates the perfect balance of riot grrrl and alternative emo sounds. Using gloomy chord progressions and punk barebones, each aspect of the band’s skill from Ashrita Kumar’s vocals), Paul Vallejo on guitar, Myron Houngbedji on drums and Erich Weinroth on bass. I’ve been able to speak to each of them to find out more about their single and the future of Pinkshift below:

Ashrita: So Paul, Myron, and I met each other in college, and then we found Erich later through Tinder! Paul and I had met before we were looking for a drummer, which is when we found Myron.

Paul: I knew those drums: I said everyone shut up right now, I hear someone playing Helena. I honestly did a double-take. I did not expect to see a large black dude; I honestly expected a skinny white dude to be playing this but what I found was the exact opposite.

Myron: Then they confronted me and told me to learn Mars, and I guess that was my audition. I really wanted to play the drums with people, and that’s why I’m here.

Erich: I had just moved to Baltimore for school and got on Tinder in an attempt to find a meaningful relationship but instead I found something better, a band. I was doing my daily swipes and I came across this girl named “Ashrita.”

Ashrita: Paul and I had changed our Tinder profiles to “looking for a bassist” profiles in hopes of finding someone around the Baltimore area.

Erich: Being a musical performer myself, I read her bio which said something like “PUNK ROCK GIRL LOOKING FOR PUNK ROCK BASSIST”. I immediately swiped right. We matched and I messaged her saying I played bass. It took a couple of months to finally meet up because this was around November-December so we were all busy. Eventually, they sent me some of their songs and we met up and it was a perfect match.

Ashrita: We were able to play one live show as an actual four-piece before the pandemic hit, but we’re excited to play more once it’s safe again!

Myron: I was taking physics, and we were learning about the Doppler effect and redshifting. Redshifting is basically when a light source is moving away from you, so the perceived wavelength is going to appear longer, so essentially red. Redshift, Pinkshift. We thought it sounded cool, looked it up on google, and saw that no one had really done it before, so we ran with it.

Ashrita: I’m not sure if it’s right, but sometimes when I’m feeling off, wild, angry, or upset I just want to be left alone and be respected for that, or sincerely have the space to talk about what I feel without being judged. So many times, I’ve been redirected to doctors based on buzzwords I said in therapy, and I’ve been handed meds that they’re not even sure will make my situation better or worse. It might be naive, but the song is about how those systems and that kind of societal attitude toward mental illness can really put people down and dehumanize them.

Ashrita: It was all from personal experience. I never really intended for the single to specifically be about anything, but the words just kind of came out like they’re something I’ve been wanting to say. This is dedicated to everyone who thought calling me a “downer” or telling me to “lighten up” was actually useful. The music that we collectively put together fit the vibe perfectly in the manic way I sometimes experience my frustration, and it all came together as a little “fuck you” anthem. I really enjoy it.

Paul: If someone were to ask me, “what kind of music do you play,” it’s hard to say. We base our instrumental writing around pop-punk/post-hardcore vibe, but we experiment with going heavier and jazzier on chords [referencing an unreleased song]. We try to let every member of the band insert their influences, so it’s like a melting pot that gets heavier, jazzier, and grungier at different points.

Ashrita: Honestly, the new one; “i’m gonna tell my therapist on you.” This song was the first time we actually sat down collectively and said, “Hey let’s write something,” and then we spontaneously just wrote it. So this new song really does just have the perfect amalgamation of our energies. Musically, it’s also a great representation for what we come up with when we’re just trying to have fun.

Ashrita: So we’re a good mix, none of us has the same taste really. Paul and Myron come from a more pop-punk background whereas I listened to a lot of 90s grunge and riot grrrl growing up. Lyrically I love Arctic Monkeys, and music-wise I listened to Babes in Toyland, Hole, Britney Spears, and Nirvana. In terms of voice, I’m really influenced by No Doubt. I really love Gwen’s voice and how she integrated it into their punk-ska kind of vibe, and I tried to integrate that vibrato vibe at times in this new single.

Myron: My Chemical Romance- part of the reason I even started playing the drums was to play MCR songs. Actually, the drums in the bridge to this new single is directly inspired by My Way Home Is Through You by MCR.

Paul: Specifically I’d say MCR and Pierce the Veil in terms of writing darker sounding songs. I don’t like how PTV handled the allegations against their drummer, but I’d be lying if I said their sound didn’t influence the way I’ve written songs.

Ashrita: I really like this question because it made me think lol! I think I honestly don’t have a huge process, and it’s different depending on the song. A lot of the time, I write lyrics as words that I’ve been wanting to say but had no other way to frame really except for in a song, so a lot of our songs either make no sense or they’re really personal. Other times I like to find myself inside of a theme and see how I can stretch the metaphor based on my personal experience. I’ve always wanted to break out of it and do more of a story-telling kind of thing, but I’ve always been too deep in my head.

Collectively: I’m gonna tell my therapist on you; it was a spontaneous “okay let’s do it” kind of thing. It totally came out of thin air, and it felt really natural to write. We just sat down one night collectively when we were all free and wrote it.

Paul: We had initially planned to release our EP this fall, but the pandemic made us rethink that timeline and push it a later time. We’re bummed about that but we’re still thinking of releasing something this fall regardless… [suspense]

Ashrita: As for a name, let’s just say that our old fans (like SUPER old) might have an idea!

Ashrita: I think we all just want to keep going with what we’ve got. I really think that we have a new and different energy to offer and I hope that we can keep doing what we’re doing and spreading our sound to more people!

Paul: This started out as a very small project where we honestly didn’t even think we’d get to play shows. I would love to just play show after show after show whenever this pandemic starts to pass. Making new friends/connections and learning from other musicians/bands is my favourite part about being in the scene.

Some kind of sugar crisis! 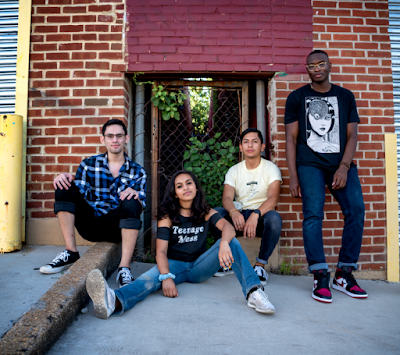