Well, my dad (who is literally my best mate and hero) brought me up listening to all the music he grew up listening to, he was in and out of bands his whole life but never really pressured me to learn an instrument or push me down a musical path. Growing up in a musical family I’ve always wanted to play instruments and sing but it never really dawned on me to be a potential career path I wanted to go down until a few years ago when I started writing songs. It was a way of expressing myself I hadn’t been able to do with anything else and just seemed fun. When I joined the band last year I quickly realised I wanted to make something sustainable out of it. I think music is such a good way of expressing yourself and making connections/meeting people you never would normally, I’ve been so lucky to be in a band with such an amazing group of people who have inspired me so much and made me even more certain I want to be a musician. It’s also class to see my dad at my gigs as I’m kind of following in his footsteps and trying to do everything he wanted to do with music.

I think our 2 most recent support slots at Think Tank in Newcastle have been the best experiences for all of us, when we supported Spilt Milk in January it was the first audience reaction that blew me away especially and gave us the momentum we needed to start proper putting the graft into our originals as we got such good feedback from everyone. As we're just starting out as a band and finding our feet this first year has been mental, getting support slots here and there to grow our audience and make a name for ourselves has been class, especially being a female-led band in the local music scene. At the moment there are a lot of 4/5 piece all-male bands, which don’t get me wrong who doesn’t love fit lads playing tunes, but it's been a massive eye-opener as for me personally meeting people and playing gigs, a lot of people seem to be surprised with how good we are (not to be up my own arse). I think a lot of female artists, especially bands with female front-women are underestimated and dismissed in a way as male musicians I think for some reason can be seen as superior. Overall the best experience as a musician has been meeting new people and making pals through music and gigs, so many amazing people I wouldn’t have met if I didn’t join the band.

I can only describe singing with Sam Fender as absolutely radge, literally no other words for that one. As someone who has listened to him since 2018 constantly sing his tunes with my mam (who is literally a super fan), it was one of the biggest pinch-me moments looking over a completely sold out o2 crowd and then to the left of me was Sam fucking Fender. I still can’t quite believe it happened, I’ll literally watch the video back and get goosebumps. I think it’s a prime example of taking every opportunity u can get. Honestly, I brought a shitty bit of A3 with a black sharpie on it, got on someone’s shoulders and then the next morning a video of me has blown up on Twitter and they’re chatting about it on Radio X. It made me realise that music is what I want to do and no matter how hard the graft will be I’m going to get there. But honestly one of if not the best moments of my life and I couldn’t be more grateful to Sam, for getting me up and the crowd around me of complete strangers who hadn’t a clue who I was but all screamed at him to let me sing it has taught me to not give a fuck what people think and to take every opportunity you possibly can.

Honestly, I don’t even know where to begin, The Velvet Underground, The Beatles and The Kinks are hands down my most listened to bands and have inspired a lot of my songwriting. I could go on and on about all the different musicians that have and continue to inspire me on the daily. Amy Winehouse has been the one artist, since I was just a bairn, that I’ve looked up to the most, her music will always hold a place in my heart and her endless talent is something I have always been in awe of. Other female artists such as PJ Harvey, Joni Mitchell, Debbie Harry and Stevie Knicks have all been massive role models to me as a lass in the music industry, they are all such massive names and ridiculously talented musicians and have inspired me a massive amount so far. Artists like Kelsy Karter and Lea Metcalfe (lead singer of The Mysterines) are two women in the music scene today that I massively look up to, they never fail to amaze me in everything they do, the quality of their music is outstanding and the way they portray themselves to their audience is so inspirational. They give absolutely no fucks which is what I’m making an attempt at. I can only wish to one day be as amazing as they both are.

At the moment I haven’t stopped listening to Rufus Wainwright and his song ‘Dinner at Eight’ blows me away every time I listen to it. I don’t think I could ever choose a favourite song, it all depends on the mood I’m in. If I’m in need of a bit of a cry ‘I get along without you very well’ by Chet Baker is a must for me. Chet Baker's music is extremely meaningful to me, my mam introduced him to me as a kid and I fell in love with his voice as soon as I heard it. ‘Love is a losing game’ is also one of my all-time favourites in fact any Amy song falls into that character but this one, in particular, holds a special place as me and my dad would perform it together at all the little family gatherings, he would play and I would attempt to sing in front of everyone but it’s always been one of mine and his favourites.

100%, there always has and I think always will be a gender imbalance in the music scene. In Radio X’s Best of British top 100, 2 of the artists were female. 2 artists. Out of 100, that literally blows my mind and just shows we as an industry need more women gracing the scene. I think male-led bands and artists will always be more popular with the majority but I also believe that as time goes on the gap should close between male to female artists. Funnily enough, when I approached the lads about joining the band, as I knew they didn’t have a singer, they were all against ‘having a lass in the band’ just because I think they knew that all-male bands tend to be more popular. It wasn’t until I sang with them that they realised we all work really well together so I really believe we need to find a way to get rid of the preconceptions and misogynistic mindset that men use towards women in music. I don’t think there’s a specific way or method to reduce the gender imbalance but I do think that festivals and promoters play a huge part, by providing a bigger platform for female artists (which is not being provided now) I believe the gap will close gradually and we will see a positive change in the imbalance.

Think Tank by far is definitely the best venue we have played, we’ve played both upstairs and the underground both great spaces but the upstairs was absolutely class and has held some of the best gigs we’ve done so far.

I think one of the most important ways to support other musicians and keep the local music scene thriving is to give each other as many opportunities as possible and promote what other people are doing, whether that’s through social media or actively giving other bands support slots staying connected and involved is the best way to support the music scene at the moment.

I would definitely recommend my friends Lost Fiction, Carboot Casino, The Baltics and Spilt Milk who we have played with and supported, they’re definitely bands to watch out for as they never fail to impress me every time I see them live. Robbie Pick is also another local musician to watch, I’ve only seen him live once but his original music is absolutely class. There are honestly too many local musicians I could name the music scene at the moment is overflowing with talent and I can't wait to see all these bands/artists achieve the success they deserve.

This is a tough one, but if I had to describe my music in five words they would probably be, a way of expressing myself. Think I might’ve cheated on that one but I honestly couldn’t think of anything else. 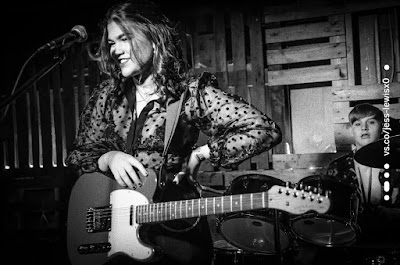