A Discussion of How Film Reflects Politics: V for Vendetta 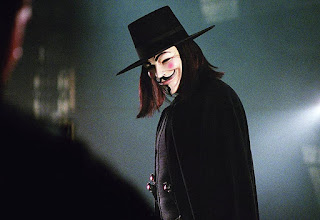 Despite being released 15 years ago, the political relevance of ‘V for Vendetta’ remains unchanged - in fact possibly more pertinent to a modern audience.

A significant role ‘V for Vendetta’ plays in helping to explain my understanding, and love of, film is how different forms of media have had the same important role of reflecting, or warning us of, the current reality. While the ‘V for Vendetta’ comic book was originally published almost 40 years ago, the film permeated popular culture within a new generation after the film’s release (despite Alan Moore being displeased with its production). For me, this demonstrates how plots can remain relevant to a range of people within a range of contexts. As a comic played the role in aiding understanding in the 80s, the 00s film then further developed this idea to a wider audience.

Evocative of The Matrix, it embodies what I love about film; its reflection of an individual’s perspective. The consistent mirroring of Guy Fawkes within V’s mask reminds an audience of the continuation of these issues with government oppression. Despite its reminiscence to an event from roughly 400 years ago, the messages of unhappiness and inequality within a constantly changing government remain true. Media is used, whether that be literature, film or music, to replicate our everyday emotions in order for those around us, and those after us, to fully comprehend the discussions and thought processes taking place at that time.

Despite the 9/11 bombings taking place just 4 years prior to V for Vendetta’s release, terrorism is presented positively, as though a necessity in order to beat an oppressive government, just as Guy Fawkes demonstrated this extremity. Through political satire and a hyperbolised reality of what may occur, the film, therefore, gives a warning to the individual of the dystopia that could occur without a change: giving demand and urgency to a wide audience within the mainstream. Films like these express the imperativeness of change - pushing the limits of how far a government could go until the change becomes too late. The audience is also faced with this ultimatum of supporting the plan of someone not dissimilar from the terrorists who caused such harm just 4 years prior or supporting the radical change needed to revolt against a populations obsoletion - the audience can transfer the on-screen events to their current situations once they leave the cinema. Movies are able to give a glimpse into the future based on an exaggerated alternative reality, providing insight into other people’s perspectives in order to challenge current beliefs - and hopefully causing the changes desired by those creating the media, or at least sparking conversation. With an increase in Political Correctness and movements like #MeToo, films are able to amplify these viewpoints in order to increase these necessary discussions.

On top of the hard-hitting plot, even the cinematography of ‘V for Vendetta’ is significant. With the camera retaining a dull colouring throughout, a war-like atmosphere is created -  with the darkness highlighting both the mystery of V and the fear within the public at the time. Even V’s home is beautifully curated as details surround every corner of the house, along with its setting of a forgotten castle, all adding to the mystery of V’s character, not becoming clear until the end of the film. This is also furthered by Evey’s switching between support and anger towards V’s plans, again, leaving the audience guessing but also furthering the idea of her indecisiveness, an attempt to individualise the thought process of the public faced with V’s announcement. This, again,  reflects real life as people are torn between two extremes: in this case, V and their government. I would say this was very similar to the split caused during the UK’s 2019 General election, a one in which many were passionate on who they were voting for while others felt split between a very extreme left-wing leader, resembling V, and continuing to support a party who had been on a downward destructive path for their time, the current Government in ‘V for Vendetta’.