The Samphires - Issue One Full Interview

In year 10 we suffered through music GCSE together and our school was taking part in a Battle of the Bands competition so we decided to form a band for it even though 2/3 of us couldn’t play our instruments. Our music teacher gave us 20 minutes during a lesson to come up with a band name and Elise thought ’the Samphires’ was cute and meaningful because she thought it was a vegetable that grew in the River Tyne. Sadly she lied and instead we became stuck with being named after a disgusting salty vegetable, “poor man’s asparagus”. We ended up winning the competition and so felt like we couldn’t change our name but it’s kind of grown on us now and we just find it funny.

Our biggest influence has to be Big Thief. Their song writing skills are incredible; they create a sense of unpolished spontaneity within a tight and beautifully crafted framework. We are always inspired by their ability to constantly transform their sound in innovative ways while remaining true to themselves, also Adrianne Lenker is one of the best lyricists we have ever heard. Declan McKenna has always been a huge influence for us, he has unashamedly always spoken up about important issues and his performances are always filled with so much energy and love for what he does. He’s also nostalgic for us as his song ‘Brazil’ was one of the first we covered. In less detail, some of our other favourites are Nick Drake, Radiohead, Yo La Tengo, Samia and Rizzle Kicks. (Rizzle kicks are incredible and we listen to them on the way to every gig for some serotonin)

I often write my lyrics really late at night when I can’t sleep from overthinking. Due to this they are usually extremely personal, the majority are an expression of my insecurities and fears. The action of writing whilst feeling overwhelmed with these feelings is often extremely cathartic to me and allows me to understand and articulate truly what I am experiencing. I think it's important for me to be honest within my lyrics as this allows me to fully utilise the emotions whilst performing the songs which I think makes them more powerful. Despite the lyrics being really personal we always want people to be able to relate to them in their own way.

To create music we are proud to give us the confidence in what we play so that we can enjoy every gig to its fullest. Over the years we have played to a few rude audiences which really got us down but over time we stopped putting our efforts into trying to make music for those people who didn’t appreciate us and instead made it for us, creating a level of authenticity which we feel really helped grow more meaningful support.

Definitely. We all need to work towards making the scene a more comfortable space where it doesn’t seem intimidating to join, this would inherently give more girls the confidence to become a part of it and would hopefully help the imbalance. People who are already part of the scene need to be more open to help others who are just starting out and not mocking them for things they don’t know yet, for example not understanding equipment. Also trying to dismantle some of the preconceptions that come with women in bands that we have seen, often having to work harder to gain respect due to judgements - something that can be extremely off-putting and difficult for confidence that many of the male bands will not have experienced.

Star and Shadow Cinema is one of our favourites, its volunteer ran, extremely friendly and supports local bands and on top of this puts on many community events. They’re continuing to do a lot of online radio shows and clubs so we’d highly recommend checking that out and supporting them as much as possible. Bobik’s is another important venue for us, its attached to the Punchbowl which is dog friendly (always a plus) and they always create a lovely environment for gigs. Our other favourites are Cluny 2 and the Cumberland Arms which have got to be some of the cutest in Newcastle. In terms of how to support them we think it’ll be important as gigs restart to try as much as possible to prioritise going to and supporting smaller independent venues as they will not have funds that the venues run by bigger corporation have to help them get through this tough time.

Some great local musician’s we’d love to share are MARKETPLACE, Dog Years, Cat Ryan, IMOGEN and Nadine Shah. Then some other creatives we love are @_ellasphotos__ on instagram, we don’t know her, but her photography is amazing. @takeme2atlantis is a tattoo artist who does really beautiful work. @zehra.fire is a fire dancer who we played a gig with once, she is lovely and incredibly talented.

Sad, but it still bangs. 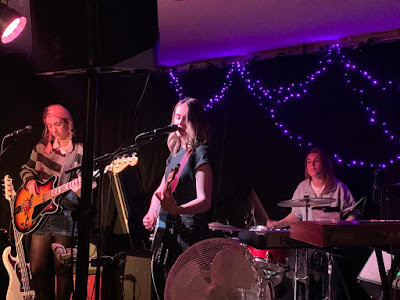