1. How did you meet each other and what’s the story behind your band name?

We all went to Leeds College of Music. GK and Grace were flatmates at the time and had discussed being in a riot grrrl band. GK then put a post on Facebook looking for female/identifying instrumentalists and we all came together. We got the name ‘Venus’ because GK’s old Instagram name was Venus Girl around the time we came together as a band. It sort of made sense to be called Venus because of the philosophy and background of the goddess. We go under Venus Grrrls online for our online footprint. The ‘Grrrls’ is heavily influenced by the Riot Grrrl movement which is super important to us and our sound.

We have a lot of artists that inspire us as we all listened to such different music. Some bands that we listened to as a collective are Bikini Kill, Garbage, Dream Wife, L7 and Rosetta Tharpe. The Riot grrrl movement is a massive influence on us as a band and is what brought us together. “Riot Grrrl” was a movement in musical history that is once again not spoken about often enough. Particularly because it gave lgbt+ creatives a safe space to explore art. This had a knock-on effect throughout the entire industry and hopefully means some lgbt+ creatives now feel safer in the industry despite there being loads more work to be done. This movement has definitely allowed us to feel safer as musicians in the industry and has allowed us to write music with more ease than we could have before the movement. It was actually a riot grrrl band, Bikini Kill who brought us together and set us on the path that we are on today. During one of our first rehearsals, we learnt Rebel Girl and we still play this cover at our shows. It’s a song that means a lot to us.

Mostly GK writes about things that are personal to her, things she has gone through such as mental health, bullying, friendships and relationship; substantially exploring themes of mental health, liberation and integrity.

I think we all individually have our personal favourites and all of our tracks have very important individual messages. Deranged is about being a woman in alternative rock and the struggles we go through. But as a whole, we would have to go with Amy as this is one of our newer tracks and it explores the theme of mental health. It’s about opening up and talking to people about what you’re going through. Do not suffer alone.

There’s definitely an imbalance in the music industry as a whole. In particular, you can see this imbalance on festival lineups. Something that we are trying to do is show that there are many women in the music industry and they need to be given the platform from the bottom up. Representation is key so that young women can see themselves up on the stage. As an individual, you can show your support by requesting bands to be on lineups, interacting with them online and supporting them at shows.

We do this organically rather than it being a thing we feel we HAVE to do, we try to use elements of feminism in our everyday life experiences. So rather than constantly writing a staunch feminist song, we want to write about our life experiences that may have feminist undertones. We feel this is the best way to not essentialize ourselves JUST as girls with guitars. We’re more than that

Due to Covid-19, musicians and venues are seeing the impact of the pandemic. If you are in a position to, buying march and music directly off the artist is super beneficial, or from their Bandcamp. On top of this, some musicians and venues have set up donation pages. Music Venue Trust (MVT) launched a new campaign called 'Save Our Venues', in a bid to stave off the continued economic threat to over 500 grassroots music venues throughout the UK. You can find out ways to support your local scene by googling ‘Save Our Venues’. If you’re not in a position to donate, sharing, following and liking local artists is also impactful as you’re spreading the word and supporting artists.

Following, liking and sharing musicians content online and if you’re in a position to do so, buy their music and merchandise online.

There are so many! Go check out Crawlers, Sing Again Syren, Marketplace and Gen and the degenerates. We are releasing a music video for ‘You’re Alright, I Guess’ very soon, a bunch of our friends in bands are featured in it. So go check out the credits and listen to their music! 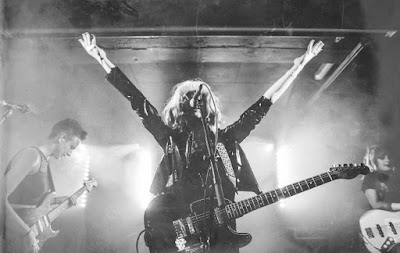