The story behind the name SoundLass comes from a few different things. When I started the project, I had no idea what I wanted it to be called but I knew the name had to be fun and reflective of what the projects all about - supporting Women and Non-Binary people in the music industry. Since I've studied Sound for quite some time now and I work as a freelance sound technician, I wanted that to somehow be included. There have been many occasions where I've felt discrimination as a woman in my career, and I feel as though that was always something I talked about to my peers and colleagues but at the time I never truly felt listened too. I started to feel like I wasn't being heard - then it hit me! Soundless sounds a lot like SoundLass, which in a way represents who I am; a lass (Northern dialect for girl/woman) who does sound! People have told me they find that story and the name a bit cringe, but I think it's perfect for me and for this project and at this point, the name has stuck, so I'm keeping it!

I find new people to work with mainly through being as social as I possibly can. I really thrive off being in social, often loud environments like gigs, pubs and events which is where I've met most of the people I work with. Understandably, there are a lot of people who aren't up for that kind of thing though, so I'm also always up for getting a coffee or having a phone call/ chatting over social media in order to find and meet new folks to work with.

With the SoundLass project, I've already had so many incredible experiences that I've been really fortunate to have. One of the best moments was receiving a personalised 'SoundLass' bottle of Jäger from the lovely team of WXMB2 when I did a big talk at their event in London on International Women's Day. The whole day was absolutely amazing and I met tonnes of new people and got to talk to people about my project and about my experiences - then a bottle of Jäger to top it off! Another one of my favourite moments has to be doing the sound for bigfatbig's debut gig, that was absolutely mind-blowing.

I have soooo many songs which mean the world to me. Music has always been such a huge part of my life. It's hard to pick just one but I think one that is most meaningful to me (especially at the moment) is The Borders by Sam Fender. The song is beautifully written and the production on it is absolute magic. Something about it just speaks to me and brings back this weird nostalgic feeling.

The response to my focus on encouraging women and non-binary people in the industry has been, well, more or less mixed I suppose. There are definitely more people who support the idea than those who discourage it. It's been wonderful to see so many people supporting the project and getting in touch with me to let me know that! The people who don't like it, I just don't have the time or energy for!

To be honest, it's been pretty tough. I find it hard to openly talk about the struggles I've had sometimes because I don't want to put other women off, but I think the key to preventing that is being honest so that people don't get a huge shock when they see the reality of it. In my time I've dealt with a lot. I've had so many guys make comments on my figure (as if that has any correlation at all with the jobs I've worked in the industry), I've been told I can make it in any company if I just show them my tits, I've overhead men I work with making comments about my 'excessive' make-up, I've been groped, harassed, manipulated, pushed around and I've had many misogynistic slurs directed at me. It's terrible, especially when you're well aware your colleagues who are men deal with absolutely none of that.

There is definitely a huge gender imbalance within the music scene. I see it so often that it doesn't even surprise me any more - something I think is toxic. If it's gotten to a point where it doesn't surprise you, it means it's just something everyone accepts when we absolutely should NOT accept that. I'm sick of hearing the same old shit that people have been saying for years; "people just don't like all-female bands".. NO people absolutely love them, but no one is willing to give them the same opportunities that people have been giving the same indie boy bands for years. Event managers and venues need to start diversifying their line-ups even if the gigs are small. Journalism companies need to work with more women and conduct interviews with more female artists - if you need an example of that just look at SpotLight UK! If you're a female artist/collective/band/producer start working with female sound technicians. If you're an audience member or just happen to be at a gig with a female artist buy some merchandise or give their social media page a follow - it's literally that easy. Everyone can be doing so much more.

I have quite a few favourite venues, each for different reasons! I absolutely love The Cumberland Arms as I've made so many memories there working with a lot of awesome people. It's a venue that feels like home to me and every time I go, whether that's for work or just for a pint, I always leave with a big smile on my face. There's also The Old Coal Yard which I absolutely adore too. You can literally see where the beer you buy from them gets made, as they make it in the venue (the beer is also 10/10)! I also love The Cluny, The O2 Academy, Pop Recs and the Surf Cafe in Tynemouth.

You can support SoundLass by giving my social media pages a follow and giving me a message if you like the content I've been posting, you can also support the initiative by encouraging your female and non-binary friends with their careers in music! To support women in music on a whole I would do any of the following; go to their gigs, download/buy their music, buy their merchandise, check up on them to make sure they're doing alright, follow/like their social media pages, connect them with people who could help them with their careers, listen to them and stand up for them.

There are so many artists who inspire me, here's a list; Beccy Owen and The Refuge, bigfatbig, Twist Helix, Kay Greyson, Sing Again Syren, ZuZu, Wolf Alice, Lizzo, Lily Allen, Sam Fender, Lady Gaga, Foo Fighters, Queens Of The Stone Age, Blink-182, Hozier, Paramore. We would be here all day but these are the folks who have been on my mind recently!

Definitely check out my friend Lauren (@Lavanderlatteillustration on Instagram) because her artwork is phenomenal! Lauren did the designs for the SoundLass logos and pictures which I absolutely adore. There's also Beccy Owen and The Refuge which is an all-female creative I am honoured to be a part of! I'll name a few others here too - Tits Upon Tyne, Worth Music, Bethan Mcconnell (photography) and Sophie Pasola (amazing make-up advice)! 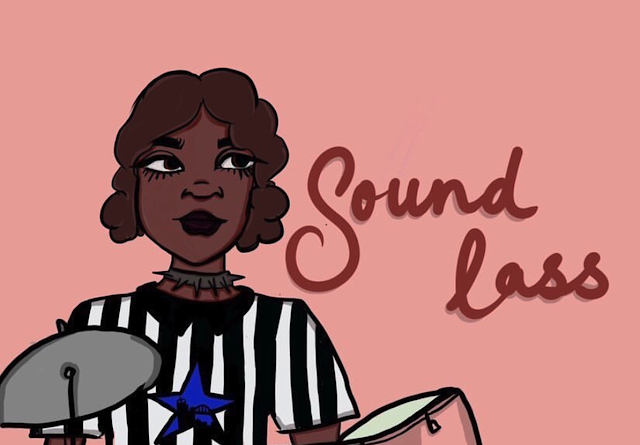