I grew up mostly doing musical theatre, went through a lot of singing lessons and theatre stuff from a very young age but I was surrounded by a lot of amazing music from my dad and grandad, lots of Fleetwood Max and Kate Bush, and around 14 I picked up the guitar and never really stopped.

I’m lucky to have been given so much support from the amazing team at BBC Scotland, my single Tonic Wine got its first radio AirPlay on the afternoon show there - there’s a line in the song that says “and here’s to the gay kids” - I was actually in the studio when they played the long and just hearing those words “and here’s to the gay kids” get played over national radio was just one of those moments where I was like “wow now that’s really cool”

I grew up loving Kate Bush - the way she takes no compromises as an artist is incredible - especially considering the bulk of her career was in the 70s and 80s a time where sexism in the music industry was even more prevalent than it is today.

I have a lot of love for my second single Fiat Five Hunner I wrote the song when I was 15 and it didn’t come out till I was 19 - it involved so much as a track and I love the direction it took - the music video for it I did with Sean Defrancesco is also insanely beautiful- if you’ve never heard an Amy Lou tune - I 100% recommend Chania it’s 4 minutes of foot-stomping indie rock with a tasty guitar solo and chorus!

ABSOLUTELY, I play with a backing band of some amazing guys and I’ve had situations of showing up at gigs and getting patched by the other bands playing and them just approaching my drummer and bassist - I think there are so many amazing outlets and platforms for womxn coming through music at grassroots level at the moment and it’s helped me meet so many amazing womxn from across the UK and I just think these outlets need to be pushed and supported and screamed about by as many people as we can get, so more womxn can feel comfortable approaching a career in music!

I’ve luckily only experienced a handful of uncomfortable moments surrounding my sexuality being associated with my music - I’ve never found it’s held me back and really these moments have pushed me to talk about it more- if anything a lot of my audience are in the LGBTQ+ community so having these conversations and dialogues alongside my music feels supernatural!

I really adore a band called Paris Street Rebels who are from my neck of the woods, Scarlett Randle as a songwriter is insane as well, and Cheryl Neilson a photographer who put together a shoot recently for a project I’m working on - who suggested I do it in androgynous drag. 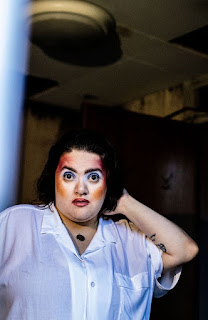