March 26, 2021
I'm not sure I actively seek out collaborators. I already know so many cool, interesting creatives, who I met at film festivals or through friends or on different jobs – many of whom I've never collaborated with before, but would love to if the right opportunity arises. It's definitely nice to have a phone full of people I could call on, but it's also great to just see them doing their own projects. It can be a great source of inspiration, and it's also really encouraging to see people I know, like, and respect celebrating victories.
The exception to all that would be when I need someone with a specific talent. I do cast through sites like Backstage, but I also really, really like working through referrals. Both the leads of my short "Demons" were people my producer and I knew and had worked with before (and, interestingly, had worked with each other before). When I was looking for music, I posted in various groups and asked around like crazy – I ended up with a song by one person I never met, who had responded to a post I'd made; one musician that a close friend of mine knew through the Bushwick DIY scene; and one band that I cold-messaged after I found their stuff on Bandcamp. So, it happens all different ways!
2. What has been your favourite project so far?
Demons, of course, is the one I'm most proud of, and I've had a lot of fun with it. It's been helpful in the process of cementing my identity and style as a filmmaker. Not to mention, it's always fun to drop that I have a "short film about a girl whose menstrual blood turns corrosive to everything but her own body" in conversation. The reactions are incredible.
3. Which filmmakers inspire you?
I'm attracted to films and filmmakers with very distinct aesthetics, and I love the weird and strange, so unsurprisingly I'm a big David Lynch fan. I've also always loved Diablo Cody's dialogue style – anything she writes just sparkles. Jennifer's Body (by Karyn Kusama) is having a moment of retribution right now, which is great because I've been singing its praises since it came out. I love that movie, and if you've seen Demons, you can probably tell. But I'm a Cheerleader is another favourite of mine, and I find Jamie Babbitt to be a very inspiring filmmaker and individual.
4. Do you think there has been a gender imbalance in the film industry? If so, what can we do to reduce that imbalance?
Oh, yeah, of course – and it's not just what I think, there's data to back this up. Various universities and media study centers come out with statistics every year on how women – let alone NB people – are represented and participants in film production and it's pretty much always dire. Even on the small-scale projects I've worked on, I've witnessed attitudes that I know are prevalent in the industry, like a general disrespect for women in high-ranking, especially creative positions. As far as what we can do to reduce that imbalance – I think people like you and me are already doing it. There are lots of women like us, in film and film criticism, who just keep making our work and growing our love, knowledge, and enthusiasm for film despite everything. We need to keep doing that, keep supporting each other, buy tickets to see movies by female filmmakers in theaters (once that's a thing we can do again) – keep knowing and proving our worth. If the people with the power to hire us and fund us have any business sense, they'll come around eventually. 5. As an actor, writer, and filmmaker - which role do you enjoy taking on the most? Has being so multitalented allowed you to do more and have more control over your work?
It's funny, I hear a bit of advice given to actors, especially female actors, a lot, which is to make your own roles. I actually haven't done much of this yet. With "Demons," I considered playing the main character but decided ultimately that I could do a better job and make a better movie if I focused on directing and let someone else interpret and embody the main character. I wanted someone else, in this case, Mamie, to bring something to it. Maybe eventually I'll write/direct/star in a web series or some other kind of project that I can totally steer, but I don't know. Making "Impossible Horizons," my thesis project for grad school, was a lot of fun but I definitely was not alone in the process. There wasn't even really a script – it's docu-style, so that made the process very different from most narrative work. In that more traditional narrative work, It's nice, when directing or acting, to be able to sink into that role fully and not have to worry about doing the other job. And you can always learn from witnessing someone else at work – reading other people's scripts and seeing them direct is informative for me as a writer/director, too. 6. How would you describe your work in 5 words?
My work in 5 words....hm. Weird, femme, fun, dark humour. Does that do it? 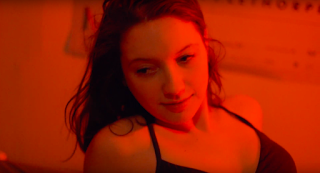