I have been brought up to love music my whole life and I always knew it would have a huge impact on my future. While learning to DJ as a hobby, my passion lies in singing and performing. I never really got to show my talent until I joined a youth group when I was 14 and got asked to be apart of the band. I have been singing there at my church for 3 years until I recently left after leaving school and starting new commitments. Although singing at my local church doesn’t seem like a lot it was a great experience and I grew my voice and confidence so much! Having been involved in this I met many many talented friends which lead me to release my very first song “new life” on the 3rd of April 2020 with the “basement collective” a project that my good friend, Kyle Svensen Began in December. I was then lucky enough to be asked to be 1/3 performers from the basement collective to open for a gig here in Auckland New Zealand, singing my VERY OWN SONG. This was my first time singing in front of a crowd that had paid to be there. It was an experience I will treasure forever.

Artists that I am inspired by vary from very local artists/bands to the most well-known artists in the world. my partner is an inspiration to me, He has recently released a 6 track EP called television on Spotify and performed for the first time EVER when only months ago he never wanted to sing in front of a single person. This then leads me to Benee. Benee began as a small female artist in NZ who then blew up on Tik Tok with her song ‘superlonely’  and is now known all over the world, she is quirky, unique and her music is Very mellow and fun to listen to. The reason she is such an inspiration is because she is very humble and supports a lot of local music knowing that it’s exactly where she started off. I have so much respect for her! My final inspiration would be Amy Winehouse. Amy is just an artist who is so loveable, I’ve always been a fan of her music and have sung Valerie many times on Karaoke but she became a real inspiration to me after watching her documentary. It just really showed me that everyone has to start somewhere and if you’re passionate enough you can get to where you want to be! An extremely unfortunate ending to her career but will always have a special place in my heart!

Recently here in NZ there has been an uproar regarding a very well known, popular, Summer festival ‘baydreams’. Now being labeled as “boy dreams” after releasing their lineup with having only 3 acts throughout the 2-day festival being women. After watching many talented, local, or famous artists become upset, disappointed, and let down it has opened many conversations about women in the music industry. I do believe that careless acts such as this can cause female artists to lack confidence in themselves. I do hope to see a change in the future but to start off small I'd love to see women having the courage and fighting for opportunities they deserve, being noticed for their talent, and being recognised as an artist. 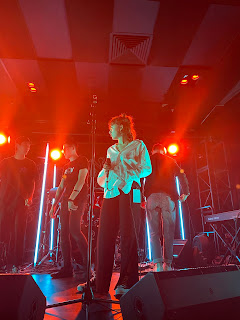