March 26, 2021
1. Which filmmakers inspire you?
My biggest inspirations in film are the people in my life who're regularly making videos. Alex Kovar (@rawheadlex and @rawhead.rex) is one of them - we’ll be celebrating our 10-year friendiversary soon. She’s always been the filmhead in the relationship, and I'm the drawer. She uses one of those old camcorders that everyone used to shoot home videos on, and it just bakes nostalgia into every shot. I was thinking a lot about her work when Via Perkins (@vialiveshere) asked me to shoot her music video for Glitter using the same type of camera.
2. What type of film do you like to create? I know you’ve made music videos, how does this differ from other forms of film?
One could argue that music videos are easier to make because the sound comes first. Sound becomes your map. I'll expect to match the visuals to the lyrics—if there’s already a story there—or to cut and shoot scenes that match the pace of the song. A lot of planning goes into music videos, which isn’t my usual process.
Usually, I don’t have a ton of forethought before I start filming. Overconceptualizing, overplanning can end up feeling very limiting for me. I like to collect as much as I can with the camera first; the direction will reveal itself while I’m sifting through footage afterward. I find this process akin to my drawing process. Make a mark and follow it.
3. How do you find new people to work with?
I usually work with people I already have relationships with. Not that I’m at all against working with new people, I just haven’t sought people outside of my inner circles much for collaborative projects.
4. What has been your favourite project so far and why?
My favorite video project so far was this experimental film I made in 2019 called Over Easy. For most of the shots, I kept the camera out of focus. I wanted to play with shapes and layering. My friend Simon Martinez (@flanafi) scored it which tied everything together nicely. Going into it knowing that at the end of all of the process I’d have someone tailoring music to my video made the whole experience a liberating one.
5. As an artist as well as filmmaker, how do these two create roles aid each other?
Though a camera and a pencil are two very different tools, they both help me build spatial understanding. Drawing or shooting, I’m working within a rectangle. A picture is being cropped and composed inside my viewfinder rectangle or my paper rectangle. I just have to decide where to place things.
6. During your career have you noticed a gender imbalance? If so, what can we do to reduce that imbalance?
Absolutely. We need to fill leadership roles with people who aren’t cis men. We need to normalize mentors who aren’t cis men, normalize that we can learn just as much if not more from artists who aren’t cis men. 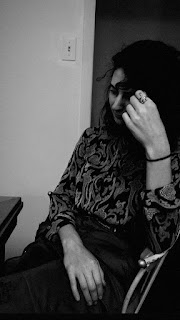