bigfatbig are a three-piece all-girl band based in the North-East of England who have recently released their new single, Milk and Vinegar. I had the honour of being sent this track before its release to be reviewed especially for Darling - a very exciting new addition to Issue Two.

Bursting onto the local music scene in late 2019, the band serves to prove that females' abilities are continually underestimated having been able to make a name for themselves in such a short amount of time. Having performed at events like BBC Radio 1’s Big Weekend, getting Radio 6 airplay, and landing places on BBC Sounds’ The Hot List, bigfatbig already have an abundance of support and experience behind them. This can be clearly heard in their music that gives off strong confidence and passion. Despite being newly formed, the tracks they have released so far are consistently bangers that get stuck in my head for weeks.

Using a funky, upbeat tempo the tune stays true to lighthearted pop. Along with their obvious musical knowledge and ability, their tunes remain fun and playful - a sound that always puts you in a good mood. A song guaranteed to make your head bop about, Milk and Vinegar combines soft vocals from Robyn Walker with punk guitar and bass riffs from Katie Ryall and Charlotte Hall that give the light tune a lowkey grunge feel making it unique from other pop and almost Paramore-esque.

With Milk and Vinegar being an absurd combination, I was immediately intrigued by its meaning.

After releasing So Bored at the beginning of lockdown, Milk and Vinegar demonstrates their developments over this time. A song about finding friends that are our non-romantic soulmates and discussing how important they are to us, Milk and Vinegar serves to exaggerate that idea of juxtaposing friendships - the people who find each other in the most unlikely ways and places. With lyrics like, “don’t ever want to burst this bubble”, Milk and Vinegar’s message rings clear - remember to tell your friends you love them. 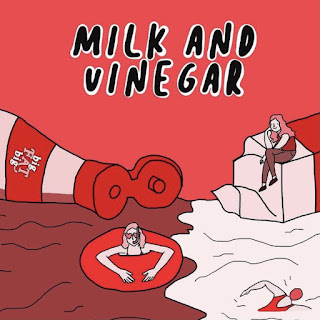