How did you meet each other and what's the story behind your band name?

Iris: We originally all met each other at an afterschool club.

Phoenix: And it was a slight mess at the start.

Iris: Originally we had 6 members with four guitarists.

Lucy: And after the first year, half of the band had left, leaving Phoenix Iris and me so we were stuck for what to do.

Matilda: And then, I had met Lucy at the start of year eight, and I joined as the keyboardist.

Lucy: And that’s how we got our current line up.

Phoenix: Now onto our name, there was this guy who ran part of the club and he absolutely despised us, and he would go on these rants, to our faces, about how we were timewasters.

Lucy: And we really liked that as a name, so we decided to go with that as it was quite funny at the time, but now holds a lot more meaning as it shows how much we've progressed since then

What’s been your greatest experience as a musician?

Lucy: Probably playing at the O2 Academy Newcastle in March of 2020, before corona.

Phoenix: B.C, you might say. But for me it's the O2 or hearing our music in demo's, that's such a cool feeling, and I wish it could stay through life, you know?

Matilda: Definitely the O2, it was so much fun to perform to a crowd of that size and have them singing along to our covers and enjoying our original stuff too.

Iris: Yeah, the O2 was brilliant!

Phoenix: I don't think that moment will ever leave me. It was absolutely incredible to perform with three amazing musicians, and we met so many people and we made so many friends as well, who are also in local bands.

Lucy: The O2 was really brilliant because we got to perform with all of these other musicians, and I think we all came away with a sense of happiness and the thought that this could be something we could do for a living

Which artists inspire you?

Lucy: For me, it would definitely be Queen, I mean I was mainly brought up on David Bowie and 70s rock but I love how Queen can do so much and cross boundaries and genres with their musicality. The Regrettes are another band I find insanely inspirational as are absolutely brilliant and I love their musicality. I also am inspired by this band from Guilford called Barerra, they have only one song out at the moment but they’re similar to the classic rock styles of Bowie and Queen, and are definitely something to look out for! They, much like us are trying to bring back older styles of music which I completely admire them for.

Phoenix: Sid Vicious, for one, very not good reason. I want to be better than him. Not too hard, I'd guess. He only played one song on NMTB and, it's just not a good song! It's just bad. But, for an actually good bassist, Pete Briquette. He's an excellent bassist and is one of my major inspirations. Or Tina Weymouth. I do love a good Talking Heads song.

Iris: Rick Allen, from Def Leppard, is an inspiration because, despite his disability, he can play the drums better than most other drummers and it makes me want to improve because he proves I can always be better.

Matilda: Some artists that inspire me are Cavetown As Robbie is true to himself and isn't fake and portrays his real self rather than the high social media standards of beauty. I also love The Wallows, because they started off their band as kids playing music for fun and just like us became a band by writing songs; their music is great and they inspire me to be a better musician, another band who started off as teens is Arctic Monkeys, who also became a big inspirational band for me and my music.

Do you think there has been a gender imbalance in the music scene? And if so, what can we do to reduce that imbalance?

Lucy: Oh, there has definitely been a major imbalance in the music scene, I mean most of the bands that are our inspirations are mainly made up of men, and it's really unfair because there are so many brilliant female bands out there!

Phoenix: Yes! A way of being able to change it is to amplify female voices in the music scene. As a person who's experience with gender definitely differs from a lot of others (he/they), I honestly would not know how to help. I wish that I could say I know how to solve everything but it doesn't take one person.

Matilda: I have not heard a lot of female bands, or bands mainly made up of female members, I would like to see a wider range of gender expression and more ethnicities as most bands are made up of white men.

Iris: I agree with Matilda as most of my favourite bands are made up of men, by promoting female bands we can level the playing field for the music scene.

Lucy: I think if female bands were promoted a lot more in our society in a positive light then more women would join and create bands as they would feel more comfortable in the industry.

Are there any local creatives (musicians/artists/filmmakers) you urge us to check out?

Phoenix: We performed alongside them at the O2 and they were one of, if not the, best act of the night!

Lucy: The Samphires are absolutely brilliant! Their music could honestly be the soundtrack to an indie coming of age movie and they're absolutely fantastic!

Matilda: I absolutely love Gen and the Degenerates! Their music is bomb and their style is absolutely brilliant, and you're definitely missing out if you do not check them out! 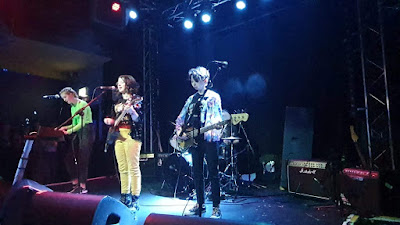