Between Patriotism and a Bittersweet Lie: The Nostalgic Return in The Farewell

Lulu Wang’s second film, The Farewell (2019), presents the story of a bittersweet

lie that unleashes a dialogue amongst a Chinese family about identity and culture. Billi, a

young woman who lives in New York, finds out that her dear grandmother has stage 4

lung cancer. The family has decided not to tell Nai Nai, the grandmother, as part of their

tradition to conceal this type of information. A wedding serves as a pretext for every

family member and friend to see Nai Nai one last time. At first, Billi was not going, for her

“inability” to hide her emotions, but she challenges her family’s decision and travels to

China to spend time with Nai Nai. As the family reunites to fulfil the wedding scheme,

issues like family, tradition, pride, and identity surface and become the central

discussion in the film. Moreover, Wang’s film is beautiful and witty. The film builds up

tension and it leads you to feel as if you know the ending. The cinematography and

music perfectly align the sentiments that the family experiences. The cast gives us an

Furthermore, Lulu Wang based the film on her own experience with her grandmother’s

As mentioned before, the film has its commentary on different topics that some

immigrant families can experience. The film shows a conversation between two

immigrant families discussing the benefits of their chosen “new home.” Haiyan and Jian,

aunt, chose Japan. In this interesting sequence, the family gathers to eat and talk about

their experiences in their countries. Billi is judged by some of her family members

because she is in America and has not become rich, she replies, “Life is not all about

money.” This leads to a commentary on “investing in talent” which seems like a wasted

opportunity. Jian, Billi’s mother, gives an example to the family of how good America is,

but Billi replies that that example cannot be a representation of all America. To some

characters, the U.S. is seen as a pool of opportunities. This scene offers two

perspectives, second-generation versus third-generation. One is fixated with the idea of

the “American Dream” versus one that has experienced fear and prejudice. This is not to

say that Billi’s parents did not feel the same, but there is a distinction between

generations. Billi arrived in the United States at the age of six and saw firsthand the

issues of the American culture. Moreover, an issue among immigrants who grew up in a place that is not their nationality is a persistent sentiment of not feeling either-or. In other

words, Billi does not feel entirely Chinese or entirely American; there is an odd in-between.

This causes a disturbance due to the seeming denial of their nationality. Meanwhile,

Billi’s uncle storms in and comments, that no matter where he is, he will always be

Chinese. The distinction between the brothers is highly interesting, a flexible perspective

among others; making it one of the best scenes of the film. The rundown is that each

and every person will see the problems that their country encounters, but will get their

head fixed on that “ideal” country.

As with all family reunions who have not seen each other in a long time, bragging

is what comes naturally. The aforementioned scene is exactly that, an extended dialogue

on where is best and a simple reason for such. The film desires to emphasize that, to

compare three major countries of the world: China, Japan, and the United States. In the

end, the film or the characters do not give an answer to where is better, because

nowhere is. Meaning, each country has their own sets of flaws, problems, and more. Due

to that, one cannot truly pick which one is better. Nonetheless, just as Billi’s uncle and

Nai Nai express their undeniable love for China, other people may feel that healthy pride

for their own homeland, which comes from the time spent there with the family and

memories. In other words, it is nostalgia.

However, there are some rough moments between the family but Nai Nai seems

to not be bothered by who is proud of being Chinese or not, and that can be seen in her

relationship with Billi. In a beautiful scene where Billi and Nai Nai talk, her grandmother

expresses to Billi that it is good to be taken care of, but it is also good to be independent.

Nai Nai expresses her love, appreciation, and support for Billi. This is something that Billi

did not entirely feel in the United States. As mentioned before, Billi moved to the U.S.

when she was six and remembers fondly the feelings each country evoked in her. In

another heartfelt scene, Billi confesses to her mother such feelings. When they moved to

the U.S. Billi felt “confused and scared constantly” and she describes her times in China

as “few good memories of my childhood.” To Billi, it is not a sense of pride, but a sense of

The Farewell encompasses the emotions of a family going through grief, a grief

that the audience can empathize and sympathize with. The reason why the family did

not tell Nai Nai is because they are carrying the emotional burden for her. It is a well-

intentioned deception. To the Western audience, this premise could be inconceivable,

yet, the lie comes from a place of love, unity, and harmony. The film serves as familiar

territory for immigrants who are able to see the cultural differences. 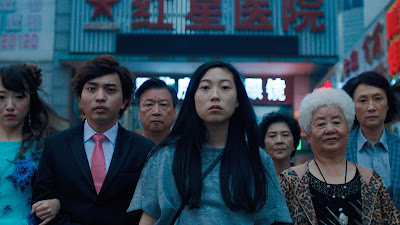