I do not want to return

To sit in the stalls,

Of an empty black box

Leave the ghost light on,

But I will not come back

To turn it off alone.

I learn this as we walk

Our ever so solemn path

You think we’re going back.

As I trace my old steps,

I fear of the day

When the symphony swells,

And I land my gaze

On you, yet you will be

Enraptured by the sound,

If you did twist

You would not see me.

So I am not sorry,

I speak out into the empty air

And I am not sorry.

You do, you look

To fall in love 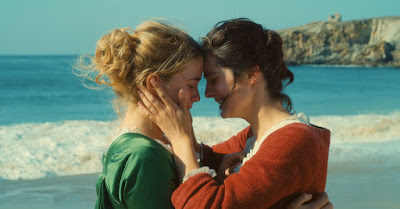 “Perhaps she was the one who said, ‘Turn around.”

On the X45 bus, back from the Tyneside Cinema, I wrote a poem entitled “Eurydice’s Final Words”, after having seen “Portrait of a Lady on Fire”.  That poem was terrible, so I wrote a new one, as my response to the beautifully poignant film.  In one scene, Héloïse, an 18th century, French aristocrat, set to marry a Milanese nobleman against her will, reads the Greek myth of Orpheus and Eurydice:

“Then, striking his lyre to accompany his words, he sang, ‘Oh, Gods of the Underworld to which all mortals descend, I am here to seek my wife.  A viper that she trod on poisoned and robbed her of her youth.  I beseech you, unravel the thread of Eurydice’s early demise.  All will be yours.  We all end up here.  This is our final abode.  You reign over the human race.  After living out her fair span of years, she will be yours.  If the fates refuse my wife this favour, I am determined not to return.  You may delight in both our deaths.’

Then, for the first time, tears wet the cheeks of the Eumenides, won over by his words.  Neither the king’s bride, nor the ruler of Hades could resist his prayer.  They sent for Eurydice.  She was there, among the recent spirits, and approached, limping from her wound.  She was returned to Orpheus on condition that he would not look back until outside or the favour would be void.

In deep silence, they took a sloping path, steep and dark, shrouded in thick mist.  They were nearing the surface, approaching the threshold, when fearing losing Eurydice and impatient to see her, her loving spouse turned and she was instantly drawn back.  She reached out for his embrace and wished to hold him.  Her poor hands clutched only the empty air.  Dying a second time, she did not complain.  His sole fault was loving her.  She spoke a last farewell that scarcely reached his ears and fell back into the abyss.” Portrait of a Lady on Fire (2019)

Héloïse responds to the myth, suggesting: “Perhaps she was the one who said, ‘Turn around,” introducing an idea of female autonomy that had previously been void in the myth.  This notion of Eurydice choosing herself to descend back into the Underworld captured me, and led me to question her motives, her internal monologue, long after I saw the film.  Fascinated by this poetic exchange, in which Eurydice grants herself and her lover one last look at each other, before finally accepting the tragic fate that has befallen them, I set about writing my poem.  I pictured a Eurydice who had now fallen in love with the perceived darkness of the Underworld, who had some knowing that she could not return to her previous life.  In this interpretation of the myth, she acknowledges that there is some finality to her death, that cannot simply be undone by Orpheus’ will.  In a moment of sincere clarity, she chooses acceptance, transforming her passivity into a choice.

This is ultimately the message of the film, ringing clearly in my mind above many of the other nuances.  Céline Sciamma, the writer and director of “Portrait of a Lady on Fire,” has herself stated that the film is a “manifesto about the female gaze.”  Just as Eurydice’s choice to look at her husband, Marianne and Héloïse’s decisions to look at one another defies the pervasive patriarchy of the time, and gives them fleeting moments of freedom.  Their love, declared as wrong by the world beyond them, is given this brief freedom on the secluded island.  The tragedy is that their love is inherently corrupted by the stifling patriarchy that taints their lives; they only met because Marianne has been commissioned to paint Héloïse’s portrait for her forced marriage.  The beauty of the film is that they find freedom and love within this dark place, just as Eurydice finds freedom on that sloping path, all through something so simple as the female gaze.

Héloïse’s desire for freedom is clear when she talks with Marianne about her sister’s death.  Héloïse is only involved in the forced marriage after her older sister committed suicide because of her engagement to the nobleman.  However, she states that she does not want to die, she wants to run.  This image of a deep craving for freedom was prevalent in my thoughts as I wrote “Eurydice’s Last Words.”  I imagined Orpheus, distraught as he mourned his wife, utterly perturbed by her decision to die, but Eurydice knew the choice she was making.  She was not sentencing herself to death, she was escaping to a place she had found some kind of freedom in, a place she belonged.  Marianne and Héloïse’s love is seen as corrupt by others, but they know the light, the freedom within what others condemn.  For me, the message is not simply one of female empowerment, but also one of self empowerment, of knowing what is right, what is light, what is free.  To have the assuredity that, when others think you are falling backwards, you know you are leaping forwards, and running onwards.