With it not currently being Pride month, for many it just means continuing with the normality in

their lives. But most of us who are part of the LGBTQ community, we do really enjoy a nice session

of queer movies that depict our lives and the issues we struggle with as a community. In this list, it

shows a variety of films from coming of age to romantic dramas and satirical comedies.

The 2018 film, based on the novel Simon vs the Homo Sapiens Agenda (Becky Albertalli), tells the

story of American high school senior Simon Spier, who goes through the beautiful beginnings of a

romance through emails, and the struggles of coming out. Although for Simon it doesn’t go as simple

as he would like it to be. The film talks about serious topics such as blackmailing, bullying, and

coming out, but although the serious theme at the end the film will leave you ecstatic about acceptance

and support from loved ones.

But, I’m a cheerleader.

Directed by Jamie Babbit, this 9999 satirical romantic comedy touches on the topic of therapy

conversion. It follows the story of Megan, a cheerleader, who has been sent to conversion therapy

to become “straight”. It follows the steps she has to go through to become so, by following a more

like copy of alcoholic anonymous steps to become sober. By the end of the film, you will be laughing

so much that you will be in tears. The film is most known also for its famous cast, Rupaul and Natasha

Based on the 2012 novel by Emily M. Danforth, the film talks about teenager Cameron Post who

has been caught with her girlfriend and has been sent to conversion therapy. This film is more

serious as it shows the reality of what conversion therapy actually (Intel’s??) and the traumas and

struggles that the kids go through being part of it through Cameron’s perspective. Despite the

serious theme, the film will make you feel compassionate for teenagers who want to live their own

The Way He Looks.

This Brazilian coming of age film was based on a 2010 short film, I don’t want to go back alone.

The film involves two boys, Leonardo a bold boy, and Gabriel a new student at the school. With

Leonardo’s best friend, Giovana, they become closer with Gabriel and their friendship grows

stronger. But for the boys, their friendship is passing the lines of what could be considered a common

friendship. The film at the end will make you feel nostalgic about your first kiss and your first love as

you watch them grow together.

The 2011 film tells the story of Alike, a 17-year-old girl African American who has come to terms

with her sexuality as a lesbian. Alike already knows she’s into girls, but hasn’t come out to her family,

which makes her mum, Audrey, not like the actions she is taking in her life or the friendships she has.

Alike is forced to wear more feminine clothes and befriend a girl from church, Bina, but their friendship

isn’t as what his mother Audrey would want to. The film depicts the topic of acceptance, religious life,

and taking your own ways in life.

The 2016 film left us speechless at the Oscar night, but the story that occurs on screen will impact

you and will make you view life in a different way. This coming of age film is divided into three different

parts, telling the life of Chiron and the events that have impacted him through his life. The first when

serious themes depicting the struggles of masculinity and the idea of being vulnerable, being black in

America, and the issues with addiction to drugs. In the end, you feel empathetic for Chiron and the

cards that life has given him without explanation. 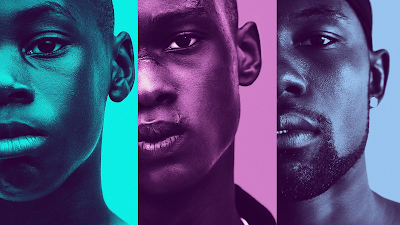