Alt-dream/pop-rock artist Mango In Euphoria has truly embraced herself in her music. She’s bold, brave and a real gem in this male-dominated industry. Based in London, but originally from France, Mango offers plenty of intriguing concepts paired with her unique singing style. 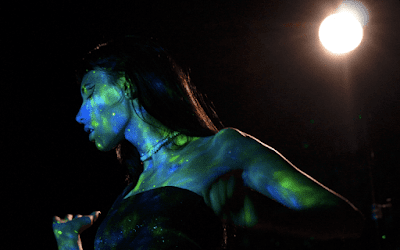 My life and experiences inspired me to write a lot from a very young age; everything that I couldn’t speak about I would put down on paper. I quickly realized I had a thing for coming up with melodies that could come up at any time- while I was studying, at work and even when I was tipsy in the pub! Discovering outstanding artists made me want to embrace the weird person I was/am. I was so upset to be different from everyone when I was young but when I started getting older I realized that being a weirdo was a gift. I guess I had to make something about it to be happy!

My writing process can vary a lot. I either come first with lyrics, or a vocal melody and then I start to build things little by little around it. I add some instruments on software like GarageBand for example, then I send it to my producer I’m remotely working with, Phillippe Francq, and he does something even better with it. He puts real instruments all together with some synth sounds and he’s an amazing drummer too so the final result is really unique.

Sometimes songwriting can be really overwhelming because I can wake up in the middle of the night and be like “oh shit I need to write this down!” so I end up with endless notes and voice memos on my phone.

Never Be The Same’s aesthetic came naturally to me. When I listen to my songs I usually know how I want the image to be like. The music always comes first and then the images appear in my head. I saw it kinda gothic, but kinda glittery so people could recognise my world. It’s a fuck off song for you to be proud as a misfit, so I really wanted to show this side where I'm still alive even if you threw me to the wolves. My lyrics- “Thank you for the pain, I’m rising from the flames”- are my own version of the saying “What doesn’t kill you makes you stronger”.

Harley Quinn from the DC comics also inspired me a lot with the red and black aesthetic as you can see, just because she’s a crazy character who’s losing her mind- especially through love. I didn’t notice this till later but the line- “Forgive me if I’m losing my mind, maybe it makes me one of a kind” perfectly matched with the character too. I’m not a big fan of video games but it happened that I wanted to relax during quarantine and I started to play Injustice 2 and my favourite character to play with is Harley Quinn.

To be honest, the words ‘Golden Shrine’ were found randomly as I wanted something to rhyme with the rest of the lyrics by trying to picture the fact I’m going to die in peace. I didn’t want to use ‘grave’ or another funeral-like word because the song is quite warm compared to my previous ones. I really wanted this song to still speak out about passive thoughts but at the same time I wanted to make it something I could dance to, because I love dancing! I really feel the music inside of me; I don’t know if it’s because I was a ballerina when I was younger but I really saw myself doing a weird spiritual dance when I was writing it.

The lyrics talk about a very toxic young woman I met during the pandemic and the vibes were so bad when she was around it would literally take my sunshine away- I didn’t like that. And as much as she was despising me, she became a creepy copycat and the worse thing is she was trying to act completely innocent. I don’t know man, I can’t fuck with these people. I found out she was a very good liar too, but I’ve dealt with too much bullshit that it became impossible for me to believe manipulative people. So yeah, the song was written in order to let go of all this bad energy. I made a new friend recently who encouraged me to keep transforming bad energies into music and it’s really helpful. Sometimes there’s so many things you want to say because you see the bad happening but as much as you try to warm people, they don’t have the ability to see what’s really going on. That makes me really sad because I’ve experienced having my reality twisted a few times in toxic relationships and it literally changed me. I’m also living with hypersensitivity so I feel everything in very strong waves in emotions, touch and smell.

The line “Steal my show, steal my glitters, it’s cute ‘cause there’s something you will never find’ is mostly there to be like ‘okay, copy, copy, copy, sneaky chic... but where’s your creativity and your consistency? Are you forever going to wait for my next move for yours to happen?’. I mean at the end you can have your own interpretation of the song, but I really wrote it because I’m someone who speaks my mind. Of course, I can be inspired by different things but my songs are always based on experiences or things I know- small or big, then I turn it into something artistic. Like a journal, with little entries of my feelings so I don’t have to be a constant drama queen when I talk to my friends haha!

No, working remotely didn’t affect my creativity. Like I said before, I come up with new ideas at any time so I have a pile of songs. Music is therapy to me, so that’s why I’m swimming in demo’s, notebooks and voice notes. Writing music helped me, especially during the pandemic to let go of a lot of dark thoughts.

I guess, yeah. Like I said I’m mostly writing about experiences. All my travels are a big part of my inspiration. London is a crazy city (when It’s not in a pandemic) and it’s been two years since I moved here and it keeps inspiring me- even when I take the tube! That’s where I found the line ‘Dreaming ‘bout my life while I’m waiting for the train’ when I was writing Never Be The Same.

I mean, you have to come to see me live to experience it yourself! I could tell you everything I want now, but actions are always important. All I can say is that, I have a crazy energy and I’m a euphoric person when I’m happy. My first backing track gig I couldn’t smiled that much my jaw was hurting. The emotions I felt inside my body were really overwhelming, like a drug except it was pure happiness. Now I’m rehearsing with a backing band so it’s going to be proper live music and it’s going to be really great. If you want to enter into a totally different dimension you should come to my world! Basically this is what you can expect from me in five works: darkness, sunshine, glitters, craziness, trippy. 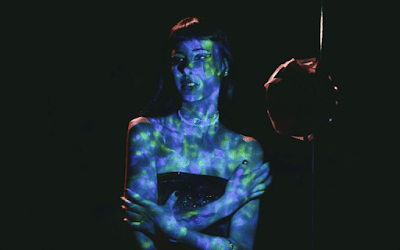 You can grab your tickets at www.mangoineuphoria.com