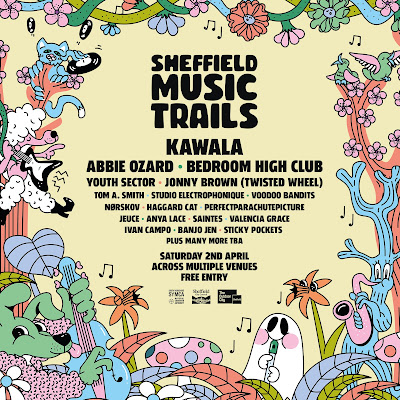 Following a hugely successful debut last August, the Sheffield Music Trails return bigger and better than ever for their second year, providing a full day of free entry shows across 19 independent music venues throughout Sheffield. This includes venues from Castlegate through to Kelham Island, Abbeydale Road to Heeley and West Street down to Leadmill Road.

Originally conceived as a multi-weekend celebration, this year’s trail condenses all the excitement of the festival into a single day, offering music-lovers an opportunity to experience a massive variety of amazing performances by some of the finest acts from South Yorkshire and beyond, as well as reconnecting with their favourite venues and discovering some hidden gems after the pandemic kept us away from them for so long - all with absolutely no entry fees.

Topping the bill at The Leadmill is North London based indie-pop band Kawala, whose latest single 'Hypnotised' has been named BBC Radio 1’s ‘Hottest Record in the World’ as of Monday 21st Feb 2022. There’s no shortage of talent and variety throughout the day either, with local acts such as Leona Nørskov (The Voice UK) and Bedroom High Club amongst those representing the region.
Alongside the fantastic local artists, the addition of UK touring acts such as Abbie Ozard, Jonny Brown (Twisted Wheel), Youth Sector, Voodoo Bandits and Studio Electrophonique add a truly special dimension to the festival, establishing it as a major nationwide celebration of music.

Set up as a joint venture, the trail was funded by South Yorkshire Mayoral Combined Authority & Sheffield City Council, via funding from the central government, in order to support the cultural and creative industries in the region. This funding is all in recognition of the hardship faced by the sector throughout the pandemic and provides a much-needed financial boost for each and every participant as we celebrate the spaces that make our city special.