After a great first wave of artists being announced in November, we now have even more to get excited over including the full comedy lineup - something I love about Tramlines unique mix of genres making it accessible to anyone and everyone.

With names like Bad Boy Chiller Crew, Lady Leshurr, Scouting For Girls, Alfie Templeman, Crawlers, and even my home-town cover band Elvana (Elvis meets Nirvana), we’re in for a good weekend this July.

Comedy returns to Hillsborough with a huge Line-Up including headliners Jason Manford, Russell Kane and Seann Walsh. This latest wave of new acts will join headliners Sam Fender, Kasabian and Madness with over five stages of music, a family friendly area and a genre-spanning Line-Up of performers including everyone from internationally acclaimed acts to grass roots talent. 2022 will mark the 13th edition of Sheffield’s Biggest Party.

Amazing female acts join the stage for 2022 again this year, with Kelis coming back in 2022 for the first time since playing Tramlines on the Ponderosa back in 2017. The multi-award winning artist is set to drop classics such as ‘Trick Me’ and ‘Millionaire’. British rapper Lady Leshurr also makes a return to the festival, bringing her expert lyricism and freestyles, best known for her ‘Queen’s Speech’ series. As well as them, joining the Friday line-up is Baby Queen, who brings her hazy alt-pop hits to Sheffield’s weekend long party.

Some guests who missed out on Tramlines 2021, such as Alfie Templeman, finally get their opportunity to grace Hillsborough park this july. After having to cancel his appearance last year due to isolating, Templeman, the ‘Happiness in Liquid Form’ singer who said he was “gutted” in missing out on his slot last year, will appear on the Saturday setlist.

Timm Cleasby, Tramlines Operations Director said, “I’m beyond excited for Tramlines 2022, Our first announcement was ace and now this? You had me at Kelis and Elvana… The return of Lady Leshurr too, just mega. Add to that Jason Manford, Seann Walsh and Lily Philips I’m gonna need more hours in my weekend.”

Last year, Tramlines festival took place as part of the Government’s Event Research Programme - making it the largest festival in Western Europe to go ahead since lockdown restrictions were eased and marked a national celebration of the return to live music. After another difficult year, 2022 will be another thing to look forward to. 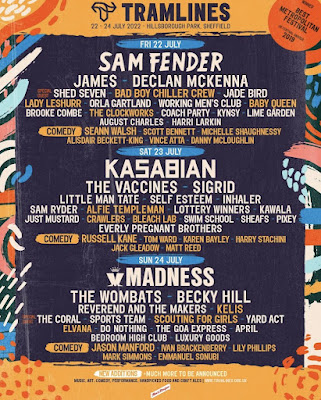 Tramlines will be taking place at Hillsborough Park, Sheffield from Friday 22nd to Sunday 24th July - there are a very limited number of day tickets and VIP upgrades remaining.