Alfie Templeman To Support The Wombats At Halloween Town Festival

The teenage talent continues his remarkable rise as he joins the lineup for the UK's biggest Halloween event in support of headliners The Wombats...

Alfie Templeman has been announced as the support for The Wombats at the three-day Halloween Town Festival taking place at The Great Meadow in Bedford on 28th, 29th and 30th of October. Bedford’s own rising star will take to the stage on the final night of the UK’s biggest Halloween event and the hometown crowd is sure to go wild as he performs tracks from his highly anticipated, brand new album, ‘Mellow Moon’ – released 27th May.

Warming up with a UK headline tour already this year, 2022 is set to be Alfie’s year. Bedford fans will be thrilled to see him, ahead of The Wombats at Halloween Town Festival, on a custom-built, 3-storey, sugar skull-themed stage, with 40ft LED screen and a host of spectacular, immersive Halloween entertainment. Tickets for this incredible event are available for just £37.50 (+ booking fee) here: https://halloweentownfestival.com/TheWombats. 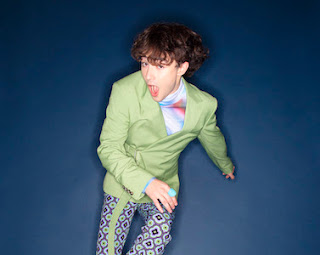 At just 19 years old, Alfie Templeman is a prodigious talent, set to explode. The multi-instrumentalist and producer recently crashed through 3 million monthly listeners on Spotify, sold out the O2 Shepherd’s Bush Empire, and has a fast-growing fanbase thanks to big tracks such as ‘Everybody’s Gonna Love Somebody’, ‘Happiness In Liquid Form’ and ‘Things I Thought Were Mine’.

Alfie grew up in the small village of Carlton in Bedfordshire. It was a quiet place giving him time to focus on his obsession with music and learn to play an incredible 10 different instruments. Despite his young age, he has been honing his skills as a producer and musician for many years and is sure to get the giant festival tent at Halloween Town Festival rocking.

Halloween Town Festival launched last year and was an instant success. 15,000 guests attended to enjoy a mix of huge headline music acts with an incredible custom-built immersive Halloween experience. With Friday and Saturday headliners still to be announced, and now Alfie Templeman confirmed to support The Wombats on Sunday, this year is going to be even bigger.