An exciting new music festival from Byker-based non-profit, Generator, is set to make its debut at Newcastle's Boiler Shop on June 25th. 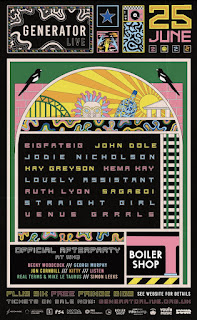 Generator Live aims to showcase the abundance of fantastic new talent bursting onto the North East music scene. The entirely local line-up features huge up-and-coming artists such as Bigfatbig, Straight Girl and Venus Grrrls, who will all take to the stage for the one-day event.

As if that's not enough, Generator will also be hosting a series of fringe events in the week leading up to the festival. These will take place all across the city at iconic venues including Little Buildings, Zerox and The Cluny. Headlining throughout the week will be Komparrison, Ten Eighty Trees and Pave the Jungle, to name just a few. Best of all, the six gigs are all free to attend for those with a ticket to the main event!

To top it off, the festival will be taking over legendary underground nightclub World Headquarters to throw an official after party at the end of the week. With a whole host of local DJs on the bill, this promises to be a sensational night.

Tickets are on sale now at only £15 for the whole week, so don't miss out on one of the most eagerly-anticipated events in local music!