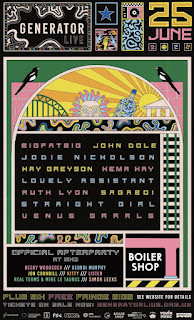 After a week of fringe events scattered across the city, the all-day festival was a true showstopper. The Boiler Shop was a great choice of venue given its status as one of the most iconic buildings in Newcastle; it really did justice to the vast array of talented musicians who took to the stage.

Crowds began to gather from the moment the doors opened in the early afternoon, and continued to pour in throughout the day. With live DJs and pints flowing, it made for a warm, summery atmosphere - exactly what festival season is about!

The event perfectly encapsulated the wonderful diversity of our local music scene, with performances from nine of the region's best rising stars (sadly Venus Grrrls were unable to perform on the day).

Opening up were four-piece Lovely Assistant with bluesy, American-inspired beats. Then came John Dole, who fused rap with sonically rich electronica to make for an astounding live performance. As the afternoon went on, we saw colourful indie-rock band bigfatbig bursting with fiery, scream-out-loud anthems; rapper Sagaboi intertwining gritty North East-themed lyrics with hip-hop; and Ruth Lyon belting out brutally honest ballads with an incredible backing band. It was then time for Kema Kay, whose infectious rhythms and stage presence got the whole crowd dancing and chanting his lyrics back to him. Jodie Nicholson wowed the audience with her blend of folk rock and upbeat, textured instrumentals, followed by Kay Greyson, whose skilfully crafted bars and vibrant character had everyone impressed.

Bringing the day to a close was Straight Girl. The solo performer's chaotic mix of EDM, punk and art-pop (dubbed 'grave rave') comes together in a mesmerising show like nothing ever seen before. Combined with comedic dance moves and horror-film-esque facial expressions, their energetic performance proved they seriously know how to both shock and captivate an audience - not forgetting their iconic self-introduction: "I am not straight and I am not a girl. If you call me a girl, I will kill you."

What was really special about the event was its variety; with such a wide range of genres covered, there was truly something for everyone. Each act drew in a different crowd, with many people coming to support a specific artist then stopping by to see what else the event had to offer. This made it the perfect opportunity for attendees to get a taste for new styles of music that they may not normally go for - and maybe even discover a new favourite artist!

Generator have already lined up a second annual Generator Live event to take place in 2023, which will no doubt cement itself among the ever-growing list of music festivals we have to look forward to in the North East.