Live at Leeds in the Park: A Good First Year?

Live at Leeds has been a successful venture for a decade and a half now. The sprawling city festival, which started in 2007, gives a stage for emerging acts to perform whilst promoting the independent music venues that Leeds has to offer. It’s a wonderful symbiosis that helps sustain the local music scene in Leeds, an industry struggling to keep itself afloat in other similarly affluent cities.

Such has been the event’s success, it has now got its own spin-off daytime version of the original festival: Live at Leeds in the Park. Based within the scenic grounds of Temple Newsam and under the warm early June sun, its inaugural edition played out.

Spread across four stages, there was a wide variety of acts that made the most of the concentrations of people on the site. With the ‘DIY big top’ and the aptly named ‘Hill Top stage’ in very close vicinity to each other, it was easy to float between the two and just follow your ear to decide on what to watch. The hilltop also gave a great view of the MTV main stage, providing the perfect place to recharge and watch some of the better-known names from the day's lineup. 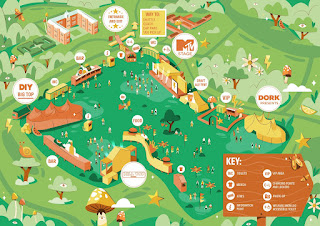 However, the best area, especially when you consider the background of Live at Leeds as a concept, was ‘Dork Presents’. Two stages situated in the same tent, they provided non-stop music with one side set up for the next band as another act performed on the opposite side. This stage played host to shorter sets from lesser-known acts; the kind of artists that the city-version regularly promotes. The performances there were small and intimate, as the slightly out-of-the-way placement of the stage led to it being a little overlooked by most of the crowds who had come for the larger names. Certain acts also weren’t helped by scheduling, with some bands clashing with more successful bands of a similar ilk, such as Courting clashing with Sports Team, which impacted their crowd sizes.
Most of the bands on these smaller stages did impress though, with the local band, L’objectif, giving a characteristically hectic performance, brimming with youthful energy, whilst Porij provided a chilled out set that contrasted some of the heavier performances from throughout the day.

The surprise of the day came from scouse punk rockers, STONE, who ripped through an astounding set at a sprinter’s pace supported by the effervescent voice of lead, Finley Power. From Power’s thick accent giving each word extra drops of venom to their fantastic bass riffs, it was easily a highlight of the day with STONE’s music translating brilliantly to a live setting and no encouragement needed for the crowd to really get into the spirit of their tracks.

Arlo Parks was also a standout performer. With a beautifully balanced set that elevated her already ethereal sound and excellent performances from every member of her backing band, it was not one to miss. Although, the early stages of this set did fall foul to the closeness of the stages on the hilltop, with Park’s sound not quite filling the ‘DIY big top’ space and allowing the nearby set from The Snuts to cut through some of the quieter parts of the music - although this was resolved by the later stages of the set. 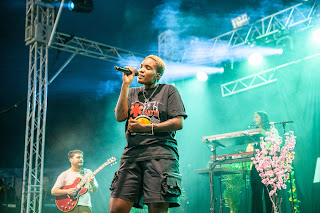 Image by Gerogina Hurdsfield
This continued a slight theme of sound issues that plagued the day, especially for the smaller bands earlier on the bill. Playing in the ‘DIY big top’, the easy-going beats of Cassia fell foul to various equaliser (EQ) difficulties, which the band had to ask to be rectified multiple times across their set, including during a song. Sports Team’s raucous performance on the ‘MTV main stage’ was also hindered by Alex Rice’s microphone almost being too quiet to hear what he was saying, and in a headline slot on the ‘DIY big top’ stage, Easy Life had their sound dramatically weakened by a speaker blowing out, leading to a tinnier sound on the drums for the rest of the set.
Overall, however, the sound quality throughout the day was excellent. The technical teams should be commended for trying to do sound engineering for so many bands on a single day and while these issues were small in comparison to this monumental effort, it is still an area for improvement in the coming years.
The organisation of the first-time festival was also done very well. Benefitting from using the same site as other Leeds-based festivals, such as Slam Dunk, the shuttle bus system to get the crowds to and from the city centre was timely and had more than enough capacity to keep waiting times low, although were slightly pricey at £5 each way. The site itself had a nice countryside atmosphere too, although this could be an aspect that the organisers double down on to give the festival a bit more identity.
And that’s what Live at Leeds in the Park was lacking: identity. It was a good daytime festival, but it’s confusing as to who it’s supposed to be for. The choice of headliner, Bombay Bicycle Club, along with some of the other acts throughout the day would suggest organisers are targeting an older audience, but then other standout names, like Alfie Templeman, Easy Life, and Sports Team, appeal to a different demographic. This isn’t necessarily an issue, as other festivals have managed to have this wide-scale appeal before, but for Live at Leeds in the Park, it didn’t work out as well, with their lower-than-expected ticket sales.
It would’ve made more sense to focus on a main demographic and make it accessible for those people. If that was a younger audience, they should have had greater consideration on the timing of the festival (as it falls within school term time and university examination periods) and done more to reduce pricing around the site. For an older audience skew, which makes the most sense, then the festival should do more to make it a boutique event, make greater use of the beauty of the site, and really stand behind the independent vendors and venues that a project like Live at Leeds was created to support. 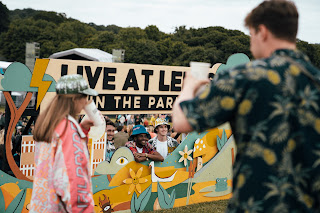 Photo Credit: @soundofapeach
All that being said, it wasn’t obvious that this was an inaugural event at all and the potential of both the site and Live at Leeds in the Park as a concept is huge. It all hangs on whether the organisers will try to hone in on these details to make next year even better.
Edited by Emily Duff