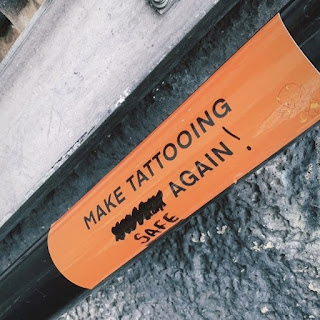 Recently, an Instagram account has been created to provide a ‘space to safely give a voice to those who want to speak out about the behaviour of one, Sheffield based tattoo artist’.

A total of 40+ posts have been made by the above social media account regarding one of Sheffield's most popular tattoo artists. Thankfully, all posts are prefaced with a Content Warning prior to sharing screenshots of the messages that have been sent anonymously to the page.

The majority of Content Warnings refer to sexual behaviour, abuse, and sexual assault. It is clear that there is a reoccurring theme within each submission, as many clients appear to have had the same experiences with the tattoo artist.

Women, mostly, are being made to feel uncomfortable while being tattooed. One of the most vulnerable positions anyone can be in, tattoo artists should make their clients feel comfortable and safe during the process - yet this artist has made theirs feel powerless and vulnerable.

The unprovoked sharing of his prejudice and outdated views on women is a common theme that has been discussed via the social media account. His opinions have been described as ‘misogynistic’, and it often appears that he would share them whilst tattooing.

A previous client recalls the artist stating: “If they come over for Netflix and chill and don’t fuck then what the fuck are you doing in my house?”.

Another example of his poor behaviour regarded crossing boundaries with clients by discussing his ‘sexual preferences’ - explaining what he enjoyed in the bedroom and bragging that he had sexual relationships with a number of clients.

The artist has also been criticized for expressing extremely transphobic views, again, without being asked. As one victim states, “he made helicopter jokes about non-cis gender identities” and added, “I didn't know what to say [...] I'm non-binary by the way”.

Another person had a similar experience where he expressed his views loudly and without provocation, so everyone in the studio could hear. The client claims he said, “Where do you draw the line with gender-neutral toilets? People could take advantage of women; men could dress up and pretend they’re trans”.

It doesn't stop there; another submission pointed out that he made a “really gross rape joke and then found it funny how uncomfortable it made us both feel.”

Recounting their experience with said tattoo artist where it was just the two of them in the studio at the time and following comments similar to those already described, the client explain that they got up to go to the toilet and, as they got their back tattooed, they put on their shirt to get up. In response to this he told them, “You don't need to cover up, it's just you and me, you know."

Afterwards, as he was wiping their back, he grabbed their waist and said, "come here, you" and pulled them into his crotch. A truly unprofessional and inappropriate act.

As well as this, there are a significant number of posts discussing the tattoo artist's abusive and cruel treatment of his dog. It has been made clear that he would “throw his beautiful dog from one room to the next” and has “hit the dog on several occasions”. Another post explains how the artist “hit her [the dog] so hard that his hand swelled up and he couldn’t tattoo, he thought that he needed an X-Ray”. If he felt he needed to go to A&E, what pain must his dog have been in?

Thankfully, the dog has now been moved to a new home.

The tattoo community as a whole is not represented by this disgusting and vile artist. Artists who embody indecent behaviour are outnumbered by many incredible, welcoming, and talented ones.

If you feel unsafe or uncomfortable in any way when getting tattooed, please speak up and remove yourself from the situation if possible.

While the account is generating a lot of much-needed conversation regarding safety when getting tattooed, it has also led to people sharing experiences from other tattoo artists across other cities. Disappointingly, this highlights the fact that the problem isn't unique to Sheffield, but is a nationwide issue. Hopefully opening the dialogue through social media allows a change to begin taking form.