Misunderstood and marginalised, even mainstream heavy metal remains shrouded in a veil of mystery. Behind world famous names notably, Black Sabbath, Metallica and Iron Maiden, the genre hides immense beauty. Indeed, there is more to heavy metal than harsh vocals and aggressive guitar riffs since beneath this tough image, heavy metal conceals an impressive range of talent including anything from folk-inspired ballads to atmospheric masterpieces. Although heavy metal remains a particularly male-dominated musical current, the achievements and talent of women in metal should not be underestimated. From household name Tarja Turunen to rising star Myrkur, here are those frontwomen that challenged popular opinion on what heavy metal should sound like.

Swedish band Arch Enemy has a strong history of success, following the triumph of the previous frontwoman Angela Gossow. Current vocalist Alissa White-Glutz proved to be a worthy successor and one of the most recognizable faces in modern-day heavy metal. Alissa continues the legacy of Arch Enemy as a ground-breaking band whilst simultaneously adding a new vibrant identity. Anyone seeking to understand women’s contributions should give Arch Enemy a chance to be heard.

From fashion icon Ville Valo to Eurovision stars Lordi, Finland maintains a solid stronghold as a heavy metal haven. Symphonic metal bland Nightwish played a huge role in securing this Scandinavian nation a place on the heavy metal map. Professionally trained as an opera singer, Tarja Turunen signalled a golden age for the band by beautifully mixing her opera vocals with their heavier sound. Classics such as ‘Wish I had your Angel’ and ‘Wishmaster’ are unforgettable, but the best showcase of Tarja’s phenomenal vocal range remains the band’s cover for ‘The Phantom of the Opera’. Tarja is now pursuing her solo career and, although the solo project has not reached the same level of fame as Nightwish, Tarja proved that opera, when properly done, can enhance heavy metal.

Vocalist of Russian folk-metal band Arkona, Masha Scream remains a particularly versatile artist. Beautifully blending the stereotypical heavy metal sound with folk music, listening to songs like ‘Goi, Rode Goi’ perfectly adds a twist on music perception, truly showcasing the potential of what can be done with sound. Despite taking inspiration from Russian folk and pagan culture, Masha Scream has not suffered nationalist allegations which are common with other folk-inspired metal bands. Given that Arkona sings primarily in Russian, their success in the worldwide metal scene is not to be underestimated.

Usually, Greece does not strike as the popular nation associated with heavy metal, but when a band manages to reach fame, Greece does not go unnoticed. Indeed, Astarte remains an interesting band within the controversial subgenre known as black metal. Although their aesthetic is highly glamourized, Tristessa gave unprecedented visibility in a side of metal that is rather male-dominated, and, unlike many artists involved in black metal, Tristessa and the other members in Astarte did not get involved in controversial deeds. Unfortunately, Tristessa passed away at a young age, but her legacy in the heavy metal world will not be forgotten.

Danish solo project, Myrkur, is not your average black metal band in terms of sound and aesthetics as Amalie beautifully incorporates Danish folk elements with hauntingly hypnotic melodies and riffs. Amalie skillfully creates atmospheric music with a spectral undertone as an amazing artist that quickly rose to fame despite singing primarily in Danish. Although Myrkur clearly cannot be considered an accessible band in terms of sound, ‘Mareridt’ and ‘Folkesange’ are extraordinary albums. Both are extremely experimental, challenging the limits of what heavy metal can achieve.

Ukraine has produced notable musical talents over the years, particularly in heavy metal. While several Ukrainian bands have a long history of political controversies, Jinjer quite luckily escapes this environment. Vocalist Tatiana Shmayluk is equally as recognizable as an icon of Ukrainian heavy metal, refreshingly providing a band that provides positive publicity for Ukraine whilst just being themselves in mainstream metal culture. 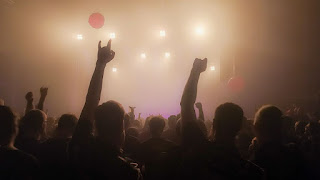