Emily Duff speaks to Holly Minto, the Lead Vocalist for Up-and-Coming band, Crawlers, live from Tramlines 2022 as they prepare to play The Leadmill Stage for Day Two of the Sheffield-based Festival (July 23rd). 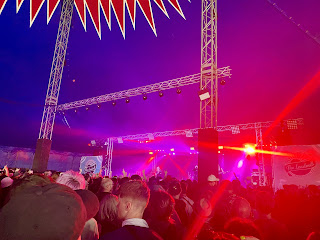 Emily: How did you all meet and decide to start making music together?

Holly: Amy and Liv went to high school together and started a band playing covers, and I then met Liv in college. We loved working together and decided to make a combo of us all. After practicing in a shed for a year or two and our drummer left we met Harry after he did a review of our single called Hush - it was amazing.

Emily: Most recently releasing ’Fuck Me (I Didn’t Know What to Say)’, you said over on Twitter “this song means so much”, could you elaborate on why this is so meaningful for you guys?

Holly: ‘Fuck Me’ discussed a lot of personal issues I have faced. After listened to Leith Ross Never Have Sex and heard the lyric “you kissed me just to kiss me” I asked myself have I ever been kissed just to be kissed? From my own insecurity, trauma I went through I wanted to channel how I wanted to be loved without my body.

Emily: I see your name all over my social media feed, do you feel a pressure to have an online presence or is this something you enjoy? Has this also made it easier to get your music recognised?

Holly: We are so privileged to be so spoken about online, it does come at a lot of issues, like I have anxiety and some people on the internet are horrible. However, we have also discovered the most wonderful people who have supported us through it all… We are so grateful for our little fanbase and everyone who risks it by streaming a band that’s spoken about on the internet.

Emily: I saw Holly, Liv and Amy passed uni recently - congratulations! How have you been able to balance making music and studying?

Holly: One answer: we didn’t. We’re grateful our university has been really supportive of our career, it’s been incredibly hard as we are so hands on with the band, marketing, campaign plans, live gigs and practice for them, songwriting and recording while also having to do life… as well as uni… was a lot. However, we’re very excited to shake Paul Mccartneys hand…

Emily: Which artists would you say inspire your music? Has this changed over the years?

Holly: We started with a lot more grunge artists, Nirvana, Queens of the stone age. As we’ve grown together we love all kind of music, I love artists like Phoebe Bridgers and Mitski, Amy loves Charli XcX, Liv loves Tool and Harry loves bands like the Chats: We love music and listening to it and genre bending.

Emily: With a UK tour coming up as well as festivals this summer, what can fans expect from your live shows?

Emily: Which track are you most looking forward to playing live today and why?

Emily: What’s been your favourite memory from your live shows so far?

Holly: In London two of our fans got engaged during come over (again), I cried like a bitch after that show…

Emily: I love your emphasis on being genderless and genreless, why is this neutrality and lack of labels so important to you?

Holly: Labels in any way can help so many people. But as we have grown as people and as musicians we have all discovered how fluid we lay… thought it summed it up well…

Emily: If people could take away one thing from your music, what would it be?

Holly: Hopefully a new song to scream and cry to…