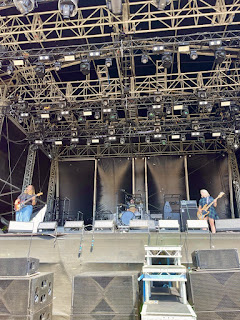 Lara: Hi all! How is your first Truck Festival going?

Yasmin: We have just got here! I’m excited to check it out.

Lara: Who are you hoping to see at Truck?

Yasmin: One of mine is Baby Queen, we actually met her before we knew she was an artist, in Bristol, and she was really sweet. She was writing or recording in Bath, she was just in Bristol by chance. Shame are always amazing, I’ve seen them a few times now and they’re just insanely good.

Lara: What’s it like being an all female queer punk band in a male dominated industry?

Yasmin: It’s very frustrating actually. It’s sad as well. We just know so many amazing non-male artists and we just want to see them do better. It’s good though - it feels nice that we’re women bringing something and we’re seeing more and more women, very slowly but it is getting better.

Lara: Where do you draw your inspirations from? I love your tracks ‘Always Happy’ and ‘Feed me’.

Yasmin: Yeah we’re supporting them in Belgium soon… probably them, I wanna support them more. I’d love to play with Nova Twins. That’s one of the top ones.

Lara: Where did the name Grandma’s House come from?

Yasmin: We were really lost for a name and we were walking around pointing out random things and our old bassist had a tattoo of her grandma’s house. And we were just like ‘Grandma’s House’, it sounds quite nice actually.

Yasmin: We’re actually releasing a song off our second EP, beginning of September. So that’s really exciting. We’re just preparing for that now, making some bits to go with it. Hopefully a tour at the end of the year.

Lara: Can you give any advice to musicians starting out?

Yasmin: Play as much as you can. We were literally just thrown into the deep end playing so much. We’d play like twice a week for a year. It’s different practicing in a studio and playing loads.

Lara: I know Bristol has a thriving punk scene, what made you move there?

Yasmin: Pops our drummer is from near there and London is just too expensive. We had so many friends who were going to gigs all the time, it’s such a good scene.

Lara: I can’t wait to see you tomorrow!