Martha Goddard turns to self-reflection as the inspiration behind her latest release, Fighter. 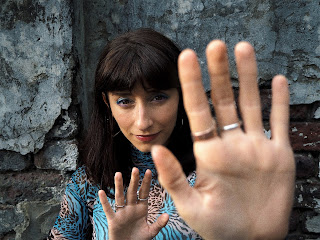 Following on from her upbeat debut single Mirror Vision released earlier this year, the track unveils a more melancholy side to Martha’s musical style. What starts off as a mellow, easy-listening track ascends into a dramatic emotional composition, exploring what it feels like to lose a part of yourself in a relationship. The lyrics are simplistic but contain plenty of depth, conjuring up a desolate, icy atmosphere. With skilfully crafted words, it gives off a real raw sense of vulnerability and weakness. A bold lyricist never fails to impress, and Martha delves deep inside her own head to publicly confront her feelings; a courageous feat to pull off so early in her career.

Citing some of her main influences as Kate Bush and Mitski, the inspiration she has taken from them shines through in the track’s dreamlike vintage quality. The beauty in its overall sound is timeless, and some elements of its composition such as the minimal keyboard melody are comfortingly familiar - while still sounding fresh and interesting. They allow her voice to take centre stage, and the smooth, dreamy vocals on this single really showcase the power in her talent. Not only is it pleasant to listen to but also packs widely varied emotional expression, as she opens the first verse in a calm but insecure tone and then begs desperately over the lyrics “Why aren’t you taking me higher? / You’re not the fighter I knew.”

The final few bars of the song show that Martha is not afraid to experiment sonically, with the verses and chorus wrapping around each other to create a hazy, heavily textured sound that captures the confusion of being overwhelmed by emotional turmoil. It plays out as a musical battle between the calmer, self-questioning side that is ready to move on and the passionate side that is brimming with still-fresh emotion.

The track is cleverly crafted in a way that feels equal parts light and dark, making it perfect for both relaxed background music and more focused, deep listening.

With her two singles so far being poles apart from each other both lyrically and stylistically, it is intriguing to wait and see which route Martha will go down with her future releases as she continues to develop her unique style - or whether she will surprise us again with something completely new!