Truck Festival: What to Expect

In just a few week's time, Truck Festival will be celebrating its 25th anniversary and will re-open its gates to 25,000 festival-goers after a three-year hiatus. The sold-out festival will run from 22nd-24th July, taking place at Hill Farm, Oxfordshire.

Truck Festival certainly lives up to its reputation of being ‘the godfather of all small music festivals’. It was established in 1998 and has been supporting immense and emerging talent ever since. And 2022 will be no exception. The lineup this year includes indie rock legends Kasabian, Sam Fender, Bombay Bicycle Club, The Kooks, and Blossoms to name a few. A hark back to peak indie!

Also on the bill are big names from Sigrid to Easy Life, Sundara Karma, Inhaler, Sports Team, and Alfie Templeman. 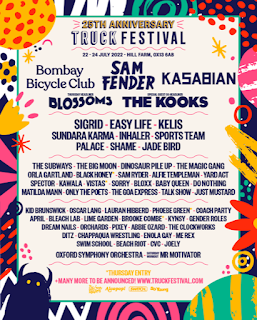 Ones to watch are Eurovision 2022 runner-up Sam Ryder, who recently performed at the Queens Jubilee concert in London, and Leeds-based punk outfit Yard Act, who shot to fame with their debut album The Overload, which was released back in January 2022. The group is "one to watch" on the BBC's Sound of 2022 shortlist.

And if those aren’t to your taste, maybe Bristol-based all-female queer punk trio Grandma’s House is. They embody a distinctive archaic post-punk sound, Think Courtney Barnett meets The Slits. Grandma’s House has recently released its fierce self-titled EP. A raucous four-track wonder. Definitely, one for the mosh pit!

Though, If you fancy getting your dancing shoes on after you’ve had a solid dose of indie all day, dance maverick Wilkinson, Switch DJs, Bru-C, Mollie Collins, and Ewan McVicar will keep you boogieing until the early hours.

The festival also has great eco-credentials, such as being single-use plastic free, and is also committed to supporting the local community as 20% of all food vendors are from within a 50-mile radius - with an aim to raise this to 35% this year. Additionally, Truck has been awarded silver status from Attitude, making it an accessible festival too.

In celebration of the festival’s 25th anniversary, Truck has announced the lineup for the V&V stage where BBC Introducing Oxford will take over your Friday with the freshest local and regional talent, headlined by the wonderful Peaness!  Saturday and Sunday are jam-packed full of Truck favourites including Nick Cope, Fonda 500, Piney Girl, and a secret headliner on Saturday! You really don’t want to miss Truck Festival 2022!