Racing to the Grave: The Cruel Reality of Horse Racing

No matter what the results of horse racing season, there's one thing you can count on - horses will suffer.

The reality of horse racing is often overlooked by the public, it’s not all posh hats and champagne flutes.

The thrill of watching and gambling on it also encourages society to turn their attention away from it. Gambling on horses has been around in the U.K since the 1600s, during the reign of King James I. People have gambled and enjoyed the sport for centuries, so it's no surprise they turn a blind eye to it – it’s seen as very normal. 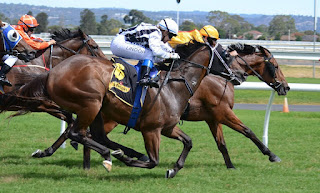 Peta revealed that over 1,000 horses used for the sport are injured or died, every year. As well as this, on average approximately 24 houses die on racetracks every single week in the U.S. Numerous are then put to sleep after suffering broken bones, some as young as two years old. The average life expectancy of a horse is 25-30 years…
The public is fed lies such as ‘the horses receive the best vet care there is. This is far from the truth. In one incident, Nehro, a horse who was forced to compete with chronically painful hoofs with literal holes in, brought attention to the brutality of the sport. In fact, one hoof was 'fixed' with superglue. After becoming violently ill, Nehro died. 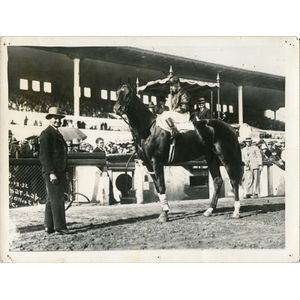 Photograph of Phar L'ap with Jockey, Bill Elliot, 1932
Ahmed Zayat, Nehro’s owner, became the first owner to publicly fire trainer Steve Asmussen due to the unethical treatment of Nehro, seen in PETA’s YouTube video from 2014, exposing the truth behind the sport. Zayat stated that he knew nothing about what was going on behind the scenes and was completely unaware of the mistreatment. Many people fail to believe Zayat, since many think he would have seen Nehro often enough to notice signs of neglect and abuse, as well as medical records.
PETA announced this year that from June 2021 to April 2022, they investigated unregulated Quarter Horse Racing in Georgia, primarily at Rancho El Centenario, the largest Georgia "Bush track". In the U.S., hundreds of these tracks operate under the radar. They did this operation to expose what the public does not see…
Meth and Coke: During investigations, it was discovered that race teams were injecting horses in the neck shortly before races, often on the racetrack itself. Their goal was to achieve maximum speed by mixing drug cocktails to rev horses up, mask injuries and stop any pain. PETA found 27 syringes and/or needles in total over the course of six different dates. 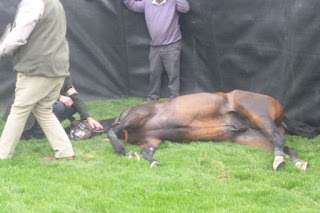 Wigmore Hall, 2014
Shocked and Whipped Endlessly: Horses were whipped roughly 20 times in a row, even at the starting gates they would be whipped from behind. As a punishment and/or to control behaviour in the drugged-up horses, jockeys and handlers whipped or hit the horses before races, during loading, and at the starting gates. Jockeys did not limit themselves to whipping. Investigators revealed that Jockeys would have shock devices at hand, to shock the neck of the horses during the race.
Death: The treatment the horses receive put them at extreme risk for accidents and fatal injuries. The whipping, drugging and electroshocking cause them to break down, resulting in death. It’s very common for horses to be shot on track when they’ve been injured, some have been dragged away by a truck – as if they’re waste on the floor. 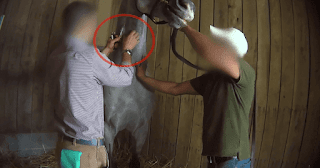