The Director’s Cut of Philomela’s Tapestry

with gold and silver threads

interrupting the silver with the gold

but never the gold with the silver, savouring

the flight of an art that sings stories

not of two sisters waking up early

to catch an episode of Tracy Beaker,

huddled up in blankets and shivering with laughter

Not of evenings waiting to be picked up from school

from the cooling streets, frostings

whipped up with cigarette smoke.

Not of essential meetings in the dead of the night

under hushed torchlight, beaks touching as they

Not the pigeon that cooed outside their window

every morning harmonising with the whirring shower,

or the tittering of their mother up at dawn

while they were birds who never caught the worm.

Philomela has no time to stitch these things

so instead her needle soars and swoops the story

in the honey jar to grope the organs

of the other woman shimmering in saliva. 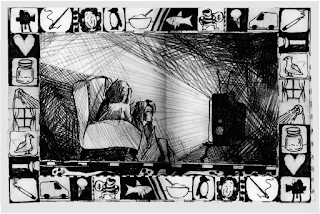