Sportswear fashion has made it into the mainstream. With the interest in vintage kits and stylish designs more popular than ever, sports teams know that their jerseys are no longer just for game day; they’re a fashion statement. 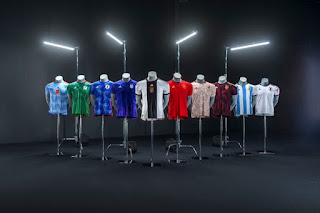 A brand that knows that better than most is Adidas. One of the largest manufacturers of football shirts in the world, their latest releases have seen them take on the national kits that will represent world cup powerhouses Argentina, Spain, and Germany, as well as football-crazy Mexico and Japan, on and off the pitch this winter.

Marked by a more minimalist approach that sees Adidas simplify their own logo, the kits of both Argentina and Spain see simple, yet sleek, home kits contrasted by sublimely inventive away affairs.

Argentina’s home kit brings back the classic stripes of La Albiceleste, reminiscent of those that saw Maradona’s magic in ’86, whilst their away kit is a blaze of purple hue inspired by the Tierra del Fuego. It’s divisive enough of a design to be seen as one of the weaker kits within this drop, but even then, it’s different. 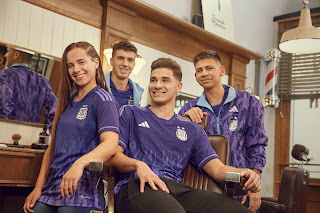 Spain has gone with an equally clean home kit of solid red, incorporating a reworked badge into their kits. It’s one of the few safer designs from Adidas, but they’ve gone all out for the away kit. Swirling shades of blue give off vibes of shimmering Mediterranean pool-side summers, along with a Spanish flag hidden in Adidas’ striped sleeve details and a centralised badge. Some heat for a winter world cup.

This centralised theme continues onto Germany’s kits, which like the team itself, have taken a turn from their sometimes-sterile styling. The home kit is downright regal, with golden linings and logos and striped flag details around the neck on an otherwise monochromatic jersey. This colour scheme continues to the away kit, with a menacing red and black strip based on the logo of the German FA. Modern, sleek, and oh so German, it’s uncompromising in its elegance. 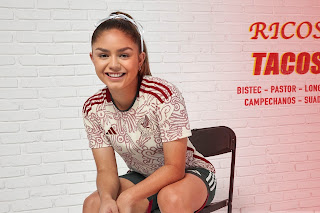 Now we get onto the real masterpieces.

Japan has always had a history of pushing the boat out for the World Cup, but this is one of the best in years. Origami-inspired imagery has been seamlessly integrated onto both designs. Classic shades of blue and white adorn the home kit, whilst the pure snow of the away strip is broken with that origami print in 3D-esque shades of blue and red on the sleeves. Neither boring nor overzealous, it is a marvellous piece of design. Drawing from Japanese traditions, Adidas has made something beautifully modern from it. The only shame is that with a tricky group, we probably won’t be seeing much of these gorgeous kits on our TV screens.

However, the Japanese kit can take a backseat for the real pièce de resistance, Mexico. Because Dios Mio, El Tri knocked this OUT of the park. It may be a new kit with a fabulous fresh badge, but it still has the same old Mexican flair. But this isn’t any 90s geo-mad party as Adidas have measured it so well. The stark green of the home kit with a wonderful eagle-like print around the neck and chest wouldn’t look out of place at a carnival. And as for the away kit? It wouldn’t look out of place at a fashion show. A two-tone Aztec print that is just the right level of loud; it’s infinitely wearable. A true contender for this world cup’s kit of the tournament and surely a new streetwear staple.

With Puma seemingly faltering on their away kits, it seems that only Nike can usurp Adidas as the king of cool, both on the streets and on the turf of Qatar.