Blonde & The Exploitation of the Sad Girl

In September 2022, Netflix released Blonde— a film based on the 2001 Joyce Carol Oates novel of the same name. This screen adaptation was written and directed by Andrew Dominik (dare I point out the obvious?) in order to depict the tragically beautiful life of Hollywood icon Marilyn Monroe. It did not take long for the movie to be critically panned with audiences worldwide expressing similar disdain. 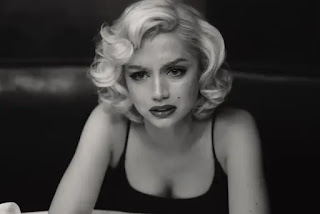 Blonde’s anti-abortion propoganda became one of the largest issues for viewers, resulting in hundreds of tweets criticizing video clips such as when a voice meant to be Marilyn Monroe’s fetus asks her why let it die. There is another scene in the movie where a CGI fetus from a dierent abortion is engulfed in ames, resulting in Monroe screaming for the operation to stop. Not only does this feel in poor taste given the recent overturn of Roe v. Wade in the United States, but also is one of the inaccuracies within Marilyn Monroe’s life that seemed to be really just unnecessary (Monroe struggled with several miscarriages, but never intentional abortions) but perhaps one could say that about many of the lm’s ctious plot points.

I say all this to establish the fact that I knew what I was getting myself into when I decided to watch this three hour NC-17 arc of Marilyn Monroe’s life. This meant skipping past a r*pe scene involving Monroe and an old white male Hollywood exec less than twenty minutes in, not just because the content itself was triggering but also due to this element of fantasy that felt too prominent. It became clear that Blonde is a painfully hyper sexual movie at the most inappropriate times. 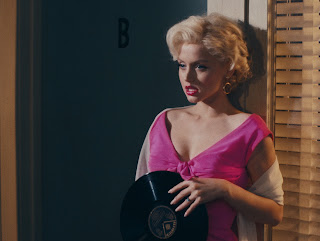 Monroe is played by Ana de Armas with her uncanny performance the only aspect of this lm to receive praise. Outside of the accuracy behind her movements and body language, what struck me about de Armas portrayal of Monroe was how the sadness de Armas conveyed felt extremely reminiscent of something from a sad girl gif I’d see on Tumblr in 2011. Although her acting is objectively strong, Blonde is a movie framed by the male gaze regardless. This means the air of sadness Monroe carries (and de Armas conveys) only serves to objectify her further. We see this through the arc of her multiple marriages— Marilyn Monroe is something to be saved, to be rescued from herself by a man who brings her into a domestic, obedient life where her primary focuses are becoming a mother and being a good wife to her husband. It’s something she yearns for, with all the men who cross her path trying to give it to her only to be unsuccessful in the end. As a result, Marilyn Monroe is reduced to being hyper sexualized, somewhat one dimensional caricature of a person.

Of course this isn’t unfamiliar to the legacy of Marilyn Monroe’s image. Blonde is just another instance in which Monroe is exploited as this tragically beautiful seductress, a persona which continues to have a grip on consumer capitalism. Still considered Hollywood’s rst sex symbol, Marilyn Monroe merchandise can be easily purchased (remember when Claire’s and Icing were practically shrines to her?) in addition to making headlines thanks to pop culture controversy such as Kim Kardashian wearing the “Happy Birthday Mr. President” dress to the Met Gala in 2022. 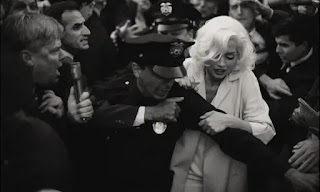 Although it has been many decades since Marilyn Monroe’s mystery-shrouded death at age 38 in 1962, movies like Blonde continue to persist mainly to satisfy the male gaze. After watching this lm and considering how often I’ve heard about Marilyn Monroe throughout my Gen-Z life, I think it’s best if we do what plenty of YouTube thinkpiece video essays are begging for and finally put the Marilyn Monroe persona to rest.