Let’s Talk About the Spray-On Dress

At the SS23 Coperni fashion show, Bella Hadid walked to the stage in only her underwear for the finale. She then is approached by people wielding spray guns, who spray her with a white, paintlike material. Except, it isn’t paint, it’s liquid fabric. Soon, a dress materializes on Hadid’s body. She looks beautiful. The crowd is amazed. In fact, everyone is amazed. Magazines buzz about how the performance is “beautiful” and “moving”. However, how much value does this stunt actually have? Fabrican was invented in 2003, and gained media attention around 2010. You may have heard of it. If you have, you may connect this invention to Manel Torres, a spanish clothing developer. You may not know that he worked alongside Sébastien Meyer and Arnaud Vaillant, who cofounded the brand Coperni.

But why did Coperni pull out this stunt for SS23?

After all, fabrican is far from modern, and to those familiar with it, using it as the grand finale is a bit underwhelming to say the least. 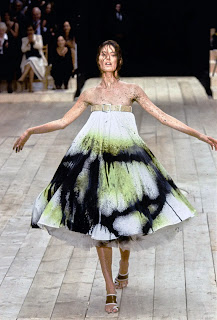 The answer presented to the public is that it is supposed to be a tribute to Alexander McQueen’s spray painted dress in 1999. Still, this answer seems a touch random. McQueen died in 2010, so commemorating his legacy now in a loose reference feels like namedropping at best. Surely, there is some other reason.

This may be cynical, but the spray on dress feels like merely another way to grab the attention of the media. Better yet, because the McQueen spray painted dress happened in 1999, it feels more original to young people who might see it online reaching an audience that designer brands don’t usually target. The interesting thing is that because it did get media attention, this may start a ripple effect where fashion houses prioritize P.R. stunts over interesting new ideas at fashion shows. This fashion week season we’ve seen models on the runway fake falls, collectively wobble in too high heels and more - is this what high fashion has come to? 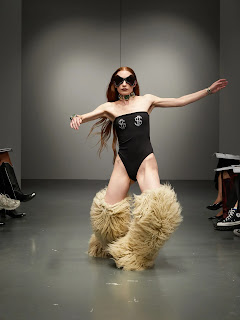 Perhaps this is pessimistic, but considering the attention Coperni has garnered, it is not unrealistic.