Live at Leeds: In the City - Smaller venues reign supreme in another fantastic year

Four months after Live at Leeds: In the Park premiered, the already established Live at Leeds: In the City returned to transform Leeds’ many bars and venues into an array of festival stages, giving a platform for some of UK music’s most exciting up-and-coming acts. The wide range of styles and sheer number of artists left you overwhelmed by choice but the general quality and talent on display meant that almost every gig was well worth dropping in to see.

The main set of venues were all situated within a 10 minute walk of one another, making it easy to wander from one to another, and each was transformed into hubs of activity and people every time a new act performed. The movement of people was a relatively calm affair, though, with there never being a feeling that you were “following the crowd” or any mass of people and the venues did a good job at managing their capacities without having to turn too many fans away.

Something also has to be said to celebrate the smaller venues, who help to hold up the festival by showcasing the majority of the music on display. Whilst bands like Warmduscher and Working Mens Club made full use of the darkened rooms and high production of the lights and sounds systems of the Leeds Beckett SU and O2 Academy respectively, some smaller venues made for a beautiful backdrop to some of the more intimate gigs. Mill Hill Chapel especially deserves praise,and played host to a mesmeric, stripped-back set from Liverpudlian singer Mica Sefia, with the light pouring through the old stained glass and crystal clear church acoustics making for a touching and inspiring half an hour of singing.

These smaller venues also did well to keep up with the ever increasing number of bands that play the event. Soundchecks were a frequently seen sight, with each a swift introduction to who was about to perform. With most venues having to do almost 10 of these during the course of the day, a few EQ problems are understandable but most were managed well. The worst culprits, however, were the pros at the O2 Academy, who struggled to get Sundara Karma frontman Oscar Pollock’s mic working at the right volume for more than 2 songs in a row. Ever the professionals, they still worked a great set out of this sound balancing nightmare and Pollock even donated his shoes to the crowd after breaking off one of the heels. 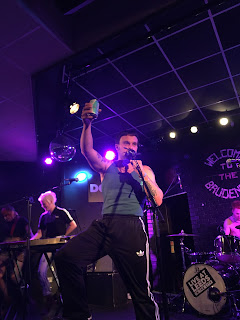 There was one place that stood head and shoulders above all the other venues, in terms of both atmosphere and musical quality though: the Brudenell Social Club. Being a lot further from the city centre than the rest of the venues, it didn’t attract a lot of attention until later in the day but boy did it deliver. The main room uses a stepped down pit and a 400 capacity to create a really intimate venue, which paired with exceptional sound quality, creates a perfect blank canvas for artists to go make their own.

This was done equally well by both Baby Dave, who took intimate gigs to a whole new level when the brains behind the project, Slaves’ drummer Isaac Holman, hopped off stage to join in moshing with the crowd, and Los Bitchos, whose groove-infused cumbia had the whole room dancing along, even to their recently released Christmas song in mid-October! 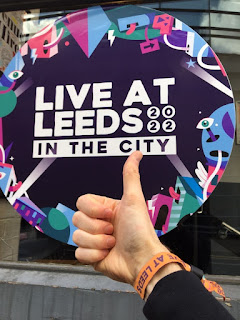 But one band made such a marked impression with their energy and fervour that it could have been one of the best gigs the hallowed halls of the Brudenell has ever seen. And that was Opus Kink. The experimental-jazz-come-punk six-piece took to the stage and enthused so much passion into every note that they played that the whole room soon descended with them into a funkadelic madness. Opus Kink played with such little restraint and caution that they seemed to be almost attacking their instruments as they played; barely holding onto them as they created a cacophony of sound that permeated every person in the room as they pushed themselves and their instruments to absolute breaking point. They became the soundtrack to countless moshs and constant movement. Every song dripped with explosive tension as the room was caught in a vice grip before releasing with each cathartic climax. Even lead guitarist Angus Rogers was so overcome by the energy in the room, as he took to crowd surfing when he wasn't behind his six-string sonic slinger. It was one of a kind.

And that’s what Live at Leeds is supposed to offer. A band had a chance to share their sound to an unknowing audience in a fantastic venue and they grabbed that chance with both hands. It goes to show what an event like this is capable of offering when everything goes right. And my word, it is something to behold.