Live at Leeds: In the City - What to expect?

Live at Leeds is back in the city for its 15th year. The multi-venue event celebrates the best of up-and-coming music, both on these shores and further afield. Previous years have seen acts such as George Ezra, Easy Life, and this year’s headliners, Pale Waves, play lower down the bill, gaining that valuable live experience and growing their fan bases before they really took off into stardom. So, who’s going to be this year’s hidden gems and what’s in store for Live at Leeds: In the City 2022?

Of course, there’s the headline attractions of Pale Waves, Sundara Karma, and White Lies, but what about further down the order? Who’s going to take an early slot, or a headliner set at a smaller venue, and absolutely tear the house down?

Our money is firmly on Opus Kink, a band so close to brink that it’s only a matter of time before they break it big. A truly unique sound, I can only describe it like Squid and Black Country, New Road’s ugly lovechild that got let loose in a secondary school music cupboard. Their music is a dearth of jazzy trumpet, ripping overdriven guitar, and funky keyboards, along with lyrics that flit around with a dramatic poetry. Give their new EP a listen and if the prospect of seeing music of this styling live doesn’t whet your appetite, they also run back-to-back-to-back with Connie Constance and Los Bitchos for the headline spots at the Brudenell. A properly exciting prospect.

Further down the bill, George Bloomfield will be bringing summery vibes to Sela Bar, and if you’re after some heavier rock, Chappaqua Wrestling will make a good start to the day as they open the billing at Nation of Shopkeepers.

One other thing that makes Live at Leeds a special festival is their championing of new acts, which can be seen through the five artists awarded slots by the festival’s Apply to Play scheme. All five are worthy winners, but Leeds-based acts Loungewear and Lois, seem to have that special something that could see them rise to real fame in the coming years. Loungewear have a super laidback approach to alternate music, with a feel of Band of Horses to it all, whereas Lois’ bedroom pop has already found a small pocket of success with her tune ‘The Way You Are’ racking up almost 140,000 listens on Spotify. So, get in to see these early! 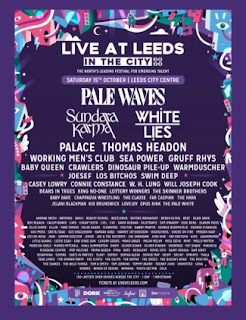 Where are the venues?

The venues for Live at Leeds are far spread across the city of Leeds. From Headingley to the Headrow, there are multitude of venues of various vibes and capacities that host the 150+ acts that play throughout the day. The best-known acts will have the gigs at Leeds’ O2 Academy, the largest non-arena venue in the city, whilst there are a host of smaller venues will be giving some of the smaller bands their first taste of live performing.

Some highlight venues to go to would be Hyde Park Book Club, a chic coffee-shop-cum-book-store-cum-gig-venue that is definitely worth a visit if you have time as it is also offering pre-festival yoga and an all-day record market to go along with its hosting duties, and Mill House Chapel because, well, who wouldn’t want to go to a gig in an old chapel?

Another beauty is the Brudenell Social Club, a wonderfully intimate working men’s club, with two stages and terrific beer that’s playing host to some stellar artists and playing live music til later than all other venues. However, being the furthest venue from central Leeds, it’s probably going to be a miss for most unless there’s an act playing there that you just have to see.

With many small bars throughout Leeds’ centre, such as Oporto, Sela, and Headrow House, also taking up spots for musicians to play, there’s plenty of venues to dip in and out of during the day.

Travel: To, From and Around

Travel into Leeds is pretty straightforward with its train station right in the centre of town and well-connected to other major rail hubs. It also has a fair number of coaches that come into the city that can provide a cheaper option into Leeds if you’re travelling from slightly further afield. The coach station also has the added benefit of being right across the road from Leeds City College, the first port of call for most as this is the exchange point for general release tickets.

Getting about Leeds too is relatively easy. Most of the venues in the centre of Leeds, such as the “main stage” O2 Academy, are walkable from the either the train or coach station, whilst the few out towards Hyde Park and Headingley are a half hour walk/quick bus trip away. Make sure to download the First Bus app to get cheaper tickets, and if you’re planning to be hopping between venues all day then getting a day ticket is your best bet.

Going home might be a bit trickier, with most late trains being just before midnight. To avoid any stress of missing the last train back, word to wise would be to keep an eye on when the last train is, where you’re likely to be at the end of the day and giving yourself an extra 15 to get there because the buses and trains WILL be busy. However, if you fancy missing some of those crowds, coaches tend to run a bit later, with some picking up from Leeds in the early hours of the morning, whilst also generally being a bit cheaper, giving you enough time to relax with a drink or hit the town after the music has died down.

And if you’re feeling superhuman, there’s an official afters at The Wardrobe. Because 5 AM trains have never hurt anyone have they?

An essential part of any festival day, Leeds has you well covered for both food and drink. Most of the venues have their own bars with those at Belgrave Music Hall, Headrow House and Brudenell Social Club offering up a fine selection of craft beers and local ales. The pricing is slightly on the higher side for a standard pub but fit well within the expected inflated prices usually found at music festivals. If price is a concern, however, then the spread-out nature of the festival allows for a stop off at one of Leeds’ many pubs or even a few tinnies from a local corner shop.

A few of the venues do also provide food, with pizzas from Dough Boys at Belgrave being a steal at less than £2 a gloriously, stone-baked quarter before 5 pm. But Leeds does have a lot of great food outlets around the city, so along with any food trucks especially out for the day, you should be covered for any budget.

But with so much going on, how can you make the most of your day?

Get on clashfinder or the Live at Leeds site, find who you REALLY want to see, where they’re playing and where you need to be at what time. It’s also essential to know where you’re going to be towards the end of the  day so you can sort how you’re going to get home from the festival.

Another thing to consider when looking at acts is to have in mind that some of these venues are small. Like less than 200 people small. And with a lot more tickets sold than that, it can be the case that people will get turned away from a venue if it is over-capacity. So, if you’re absolutely dying to see Pale Waves, chances are that you’ll need to get into the O2 Academy for the act before. You can also keep an eye of venue capacity throughout the day on the Live at Leeds app and their twitter.

As always with a festival, have some thoughts on when and where you’re going to get fed and watered to keep you going throughout the day, prepare for the weather and don’t be afraid to go see someone new.

Live at Leeds is all about those kinds of artists and finding a new favourite. So, if you find yourself with a hole in your schedule or wanting to avoid the larger crowds at the big venues, go to one of the smaller places, post yourself up with a pint and enjoy something brand new. Cos who knows? In a few years, you could be saying that you saw the next big thing.