Cruel Intention’s walked so that Do Revenge could run. 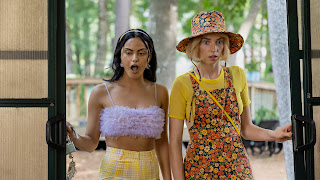 Netflix released the dark teen drama ‘Do Revenge’ on the 16th of September, and let me tell you it is a ~vibe~. Starring Riverdale’s Camilla Mendes as Drea Torres and Stranger Thing’s Maya Hawke as Eleanor Levetan. It also features Euphoria’s Austin Abram’s, Game of Throne’s Sophie Turner, and 90’s star Sarah Michelle Gellar (Cruel Intentions, Buffy The Vampire Slayer) as the headmistress! A stellar line-up, we think you might agree. It certainly appeals to millennials and Gen- Z alike.

The plot is very much ‘Stranger’s On a Train’ meets ‘Cruel Intentions’. It is an unlikely friendship bonded over school bullies at a prestigious private school. Popular Drea falls from grace when her sex tape is leaked by her ex-boyfriend Max and Eleanor a girl who outed her for being a lesbian and she is falsely accused of being a sexual predator at camp. 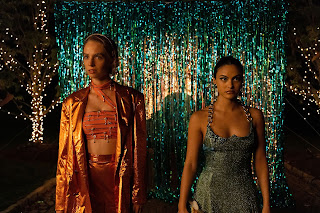 The film is littered with Easter eggs and references to iconic teen films, one favourite being the popular kids lounging by a fountain à la Scream. We also get a tour of the school’s clique’s likened to Mean Girl’s.

Self-aware, Hawke’s character even states, “I mean, as a disciple of the ’90s teen movie, I would be offended if I didn’t get one.”

While Mean Girl’s had its Plastic’s, ‘Do Revenge’ has it’s “Royal Court”, adorned in Clueless inspired pastel uniforms. Though, Rosehill’s resident It-boy Max’s style just shows how far gender stereotypes have developed in this genre. He is the classic faux-feminist soft boy channeling Harry Styles in pink chiffon blouses, and pearl-drop earrings. With his hilariously titled ‘Cis-Hetero Men Championing Female Identifying Students League’. We all know a guy like him. You’ll love the style as much as the soundtrack, as it was penned by Este Haim (from the sibling band Haim) it pairs 90s nods such as Meredith Brooks, Hole, and Fatboy Slim with contemporary bops from Olivia Rodrigo, Billie Eilish, and Caroline Polachek’s ‘So Hot You’re Hurting My Feelings’. 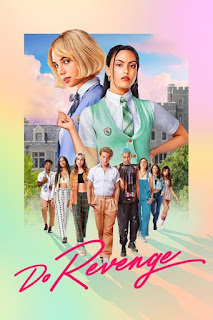 But these details weren’t the only thing I loved about this throwback drama. It endures lots of twists and turns - all in the name of sweet vengeance.

Though revenge is obviously the main theme of ‘Do Revenge’, its commentary about misogyny and expressions of female rage is what made ‘Do Revenge’ stand out from its forerunners. I also admired its queer love story between Eleanor and Max’s sister, Gabbi, which is unorthodox for this film cannon. Though, this love story was sadly not as developed as Drea’s Heterosexual one.

The female protagonists were refreshing to see. We are so accustomed to seeing angry women portrayed as hysterical and ruthless. But ‘Do Revenge’ rejects these notions. It is a thrill to watch Drea and Eleanor so unapologetic in their rage. While female revenge films like Promising Young Woman, Kill Bill, and Gone Girl have centered on the idea of female rage, there's the question of conquering outdated sexist attitudes toward angry women.

The genre is still largely dominated by men, see Django Unchained and Taken for example. This is why Drea is calling on Eleanor to channel her ‘Glennergy’ - psychopathic vibes similar to Glenn Close in Fatal Attraction. 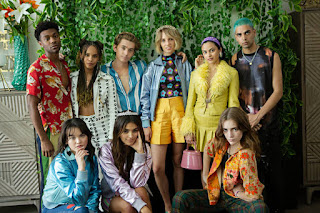 “Movies and art help us give ourselves and each other permission to be human. And the nature of being human is flawed,” Hawke says. “The more art and movies we make about flawed female characters, the more comfortable we'll get with flawed females.” and ‘Do Revenge’ is a great example of that.

When Eleanor first steps into Drea’s vintage car she complains about men getting off ‘Scott free’ for their crimes, which is a good comment about our patriarchal society. Drea’s line, “For girls, Our Bodies, Our Choices, Our thoughts are all policed by shame”, also echoes this sentiment.

Not only is this a tale of female rage, but it is also a tale of holding men accountable for their actions. Drea describes Max’s power in the line, “if men, in general, are hard to take down, Max is patriarch incarnate. The ultimate manic pixie dream boy, Max has a meticulously curated persona.”

This is shattered in the third to last scene when we see Max exhibit Wolf Of Wall Street levels of debauchery at their extravagant Great Gatsby-esque party; “I’m gonna do coke off some girls butthole or something”. This all happens moments before they expose who he is to the whole school, to Fatboy Slim’s ‘Praise you’. During this, someone chimes, “Don’t let the patriarchy hit you on the way out”. Simply. Iconic.

For these reasons, I believe this is a feminist retelling of our much-loved classic teen dramas and the power of female friendship. They both admit they are ‘f*cked up soulmates’. It is refreshing to see two unlikeable female protagonists in a hit Netflix drama, but we will have to see if it becomes a classic like its predecessors.