There has been widespread backlash on social media following protests carried out by Animal Rebellion; a vegan activism group, connected to the environmental activism organisation, Extinction Rebellion. 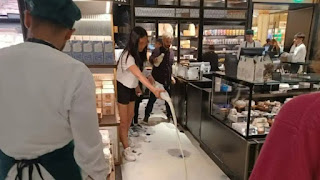 Similarly, on September 9th, protestors targeted Big Ben, blocking surrounding roads and then sprayed white paint out of milk bottles directly on to the street. In addition to this, there have been several ‘sit-ins,’ where protesters have blocked the dairy aisles of supermarkets in an attempt to disrupt shoppers. 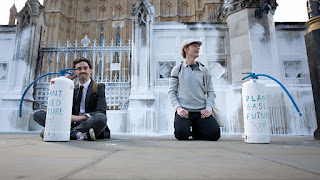 Through these protests, Animal Rebellion aim to cause ‘plant-based chaos’ to apply pressure on the dairy industry, in the hope that large companies such as Arla and Muller, will acknowledge their contribution to the ongoing climate crisis and take action. Throughout history, these radical forms of protesting have proven successful in inspiring much needed change, but are these protests actually providing the wake-up call that we desperately need?

We must all be aware by now, of the very real and worrying effects of climate change, surely? From melting ice-caps to severe weather damage, it definitely seems that the human race needs to make a change in order to survive on this planet. However, these protests seem to create more enemies than followers of this cause. 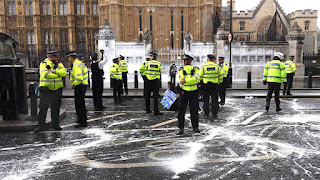 Twitter-users were outraged, pointing out the hypocrisy of criticizing the consumption of dairy products, but then wasting pints of milk by just pouring them out. Animal Rebellion responded to this, justifying this small waste in the bigger picture of what it could achieve; yet this conflict in itself takes away from the original message. On top of this, many felt angered that low-paid workers would face the brunt of these protests by having to scrub paint off the walls, or clean up puddles of milk on the floor of their workplace. Never mind the money spent from tax-payers wages in order to afford the clean - although is that anything in comparison to the years-long restoration of Big Ben that only recently concluded?

It must be said, that although awareness of the climate crisis is absolutely necessary, this form of protesting may actually be doing more damage than good. The support of the general public is a huge factor in pressuring big companies to take responsibility and make environmentally conscious changes; but the methods of Animal Rebellion in recent months may have directly prevented individuals from supporting this very important mission. 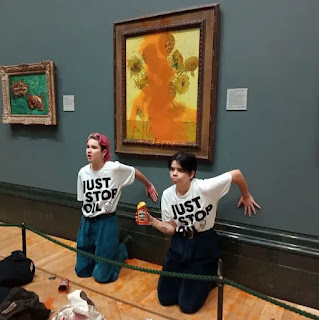 Having said this, all publicity, including the negative, for this cause can be seen as successful in gaining public attention. For example, the Just Stop Oil activists who threw a can of soup on a Van Gogh painting just a few days ago. Initially, this received huge, very negative, social media attention. People were furious that this famous painting may have been destroyed and the video went viral on all platforms, particularly TikTok. ‘What is worth more, art or life?’- is how their speech began.

At first, this is not a great look for climate change activists, however, the activist seen in the video has now released another statement. They explain that the painting was not damaged at all because it was behind a glass screen, which they were aware of before throwing the soup. In addition, the reason for doing this was so that the video would go viral in order for a wider audience to hear what they had to say. “We are getting the conversation going, so we can ask the questions that matter. Questions like is it okay that Liz Truss is licencing over 100 new fossil fuel licences?” 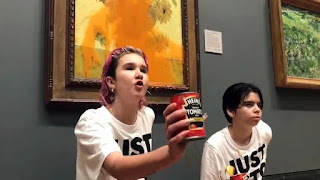 Following this, the attitude of many viewers has completely changed, TikTok users responding positively and agreeing with the points made.

So, we can all agree that this form of protesting is theatrical, and most definitely controversial. However, if the goal is to get people’s attention, it is certainly working. Perhaps now that these organisations have gained this level of publicity and are currently a very hot topic all over social media, we can look past the methods of protesting and focus on what they have to say.