So let's dive into what went down. The Rapper and Fashion Designer debuted his YZY SN9 Show at Paris Fashion Week, and only 50 or so top industry editors were invited to this highly anticipated show.

Not one to shy away from attention-seeking antics, this show fell nothing short of this. Many were left outraged and quickly exited the show upon seeing his T-Shirts emblazoned with ‘White Lives Matter on it’ - including Jaden Smith who later tweeted  “I don’t care who it is if I don’t feel the message, I’m out”. Dazed journalist, Lynette Nylander, also swiftly exited the show, writing “It doesn’t matter what the intention was … it’s perception to the masses out of context”. Others were left feeling tricked, complicit in a dangerous message they wanted nothing part of.

He sent Lauryn Hill’s Daughter, Selah Marley, wearing a Tee printed with Pope Juan Pablo II's “Seguiremos tu ejemplo” on the front, which translates to “We will follow your example”, and “White Lives Matter” on the back.

The show then ended with a photo-op of Ye and right-wing political commentator Candace Owens standing back-to-back in their matching t-shirts. Making his endorsement of right-wing populist politics known. He knows it will garner clicks on social media and stir controversy. He knows exactly what he is doing.  Kanye did not comment on the context of these but said on his (now deleted) Instagram story that “Black Lives Matter was a scam” and then went on to attack Vogue editor Gabriella Karefa-Johnson (A Black woman) in not one, but FOUR Instagram posts. In these slew of posts, Ye referred to Karefa-Johnson as both a “droid” and “not a fashion person”. An insult rife with sexism and misogynoir. Also, serving to prove his own lack of education and self-confidence as Karefa-Johnson was recently named in the Business of Fashion 500, is a prominent Global Fashion Editor and Stylist for Vogue, so yeah, she is a “fashion person”.

She described his White Lives Matter show as an “incredibly irresponsible and dangerous act”. This is certainly true, as this collection endorses white supremacy, unsurprising as Kanye is a known Trump Supporter and once sported a “Make America Great Again” cap. Back in 2018, Ye also claimed that slavery was a “choice”, meaning he is no stranger to endorsing radical and dangerous ideologies. Karefa-Johnson also described the T-shirts this man conceived, produced, and shared with the world as “pure violence”, also writing, “There is no excuse, there is no art here.”

In emblazoning a t-shirt that has been classified by the Anti-Defamation League as a hate slogan, Kanye has created a harmful rhetoric in which, if a Black man can utilise, commodify, and project a racist message, that is rooted in white supremacy and favoured by the Klu Klux Klan, then why can’t everyone else? This is 2022, and as we all know Black lives do Matter, Black people across the globe are still being needlessly murdered by the police. So this ‘message’ is particularly harmful. 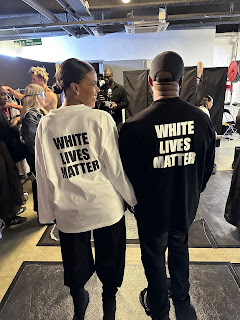 It is a particularly insidious message to send amidst Black History Month, we should be celebrating brilliant Black talent like Karefa-Johnson, not taking the regressive stance that this show conveyed.

In her writing, Karefa-Johnson also argues that, “West was trying to illustrate a dystopian world in the future when whiteness might become extinct,” but in reality, she said his show did something with an entirely opposite effect: “It’s hugely irresponsible to furnish the most dangerous extremists with this kind of fictional narrative.” This show evidently missed the mark.

Fashion has the power to disrupt the status quo, but this collection seemed to have an opposing effect. There is nothing ironic, subversive, or funny about racist messaging. Especially with the rise of far-right political leadership across Europe this seems to echo these harmful ideologies. 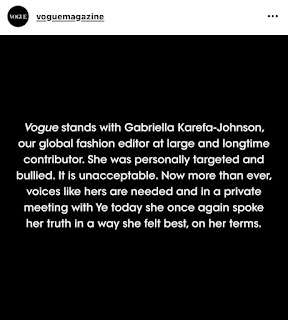 Vogue have taken to posting an official statement on their Instagram that “stands with” Karefa-Johnson, calling West’s attack on her “unacceptable.”

“Now more than ever, voices like hers are needed,” the magazine wrote. “And in a private meeting with Ye today, she once again spoke her truth in a way she felt best, on her terms.” The statement from Vogue came after West called Karefa-Johnson “my sister” in his own Instagram post, said that they met for “two hours” and claimed that iconic director Baz Luhrmann filmed the interaction, per Anna Wintour’s request.

But the damage has been done, after blacklisting Gap, stating harmful comments towards established Fashion Editors and curating a disturbingly inexcusable fashion show, Ye will likely never be taken seriously by the fashion industry - something he so clearly wanted. For someone who spoke so enthusiastically about making clothes for the future, his collection is regressive, and therefore nothing to be celebrated. Having been given chance after chance despite airing such violent, abhorrent controversial views, is it time we finally stop giving Ye the attention he so desperately craves?