SHEIN is the worst. Here’s why

A new Channel 4 documentary, ‘Untold: Inside the Shein Machine’, exposes the poor treatment of garment workers within SHEIN factories in China

Most of us know that fast fashion is bad, but the documentary released on October 17th exposes the extent of what goes on behind the factory doors of the ultra-fast fashion brand SHEIN. It is truly horrifying. 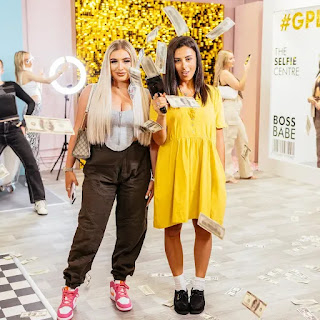 The documentary delves into all of SHEIN’s worst secrets in just under an hour. Including the fact that SHEIN’s highest-paid factory workers earn just £500 per month, while being expected to generate up to 500 pieces of clothing daily.

For other workers, starting salaries are not a given. The majority are paid just 3 pence for every garment they make. If errors are made, employees can then be liable for a salary cut of up to two-thirds.

On top of this, SHEIN’s employees usually work up to 18 hours per day for all 7 days of the week. They are granted just one “rest day” each month.

“There’s no such thing as Sunday here”, says one factory worker. Many employees work till 2 am, often found washing their hair on their lunch breaks. This also violates China’s labour laws. 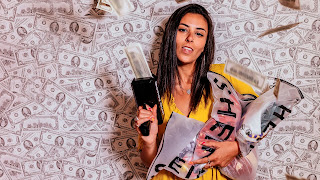 In April of this year, SHEIN was valued at $100 Billion.

This is all made achievable through exploitative practices and a business model that allows it to churn out an astounding 10,000 new products every single day. This combination makes the company miles ahead in terms of production rates compared to its competitors.

This practice has also allowed it to be worth more than high-street competition, Zara and H&M combined. Aided by selling clothes at a fraction of the price of its competitors.

As fair fashion campaigner and influencer, Venetia La Manna hit out on Twitter. In her tweet she shared this shocking comparison created by Business of Fashion using information sourced from Edited. 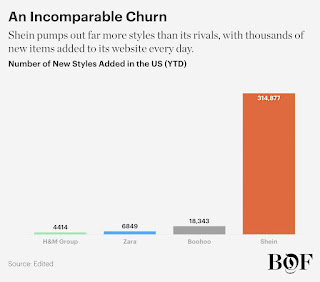 The environmental impact of fast fashion cannot be ignored. In the UK alone, a whopping 1.2m tonnes of clothing waste end up in a landfill. The 360,000 tonnes of the textiles thrown away every year in the UK are from clothes. The average item of clothing is only worn 10 times before being discarded. And, the fashion industry is responsible for 10% of annual global carbon emissions according to Morgan McFall-Johnsen (2020). Not to mention, Textile production also contributes more to climate change than international aviation and shipping combined.

This is damning news, and when it comes to the return policies of many fast fashion retailers such as SHEIN, they have begun allowing buyers to keep their purchases instead of sending them back.

This is not an act of goodwill but is purely economical. As it’s cheaper than shipping and returning clothing into suitable packaging for official resale. The effects of this option mean that clothes are not resold on to someone who will use them but rather thrown away immediately.

In wake of the documentaries release, another slow fashion influencer, Reena Rai, spoke out against SHEIN on Twitter. 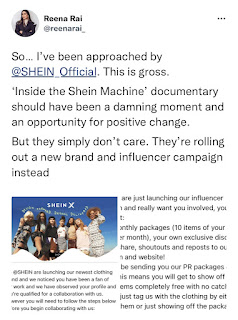 As Rai explains, the release of the documentary was the perfect opportunity to change its malpractices. Instead, they have released a new campaign and even a resale platform called ‘Shein Exchange’. Similar to recent controversial campaigns like the Pretty Little Thing marketplace and BooHoo’s collaboration with new ‘sustainability ambassador’, Kourtney Kardashian, this won’t solve the vapid overproduction, labour law violations and environmental destruction left in its wake.

As a growing number of consumers demand sustainability from fashion, this encourages fast fashion brands to greenwash their branding and products. As a reminder, SHEIN is still rated ‘very poor’ on the ethical fashion directory, Good on You.

Instead, fast fashion retailers like SHEIN could start by paying their workers a fair wage and cutting down on production. Especially as Fast fashion emissions will grow by 50% by 2030 if current growth continues, according to the Ellen MacArthur Foundation.

Companies like SHEIN must take responsibility for their destructive impact on the environment. With the climate crisis already creating chaos in developing countries it needs to be sorted.

But, the question remains, when will fast fashion brands like Shein ever learn?

‘Untold: Inside the Shein Machine’ is streaming on All 4 now.