(My unresolved trauma or commonly known as my father)

I remember one winter night, he dropped me off at a single mate’s house who had a daughter too.

They made me dinner then we watched a movie on the couch. Then they both fell asleep and I stayed up looking at them. Until I stopped and decided to look out of the window. I feel like I look out of that window for days.

Absolute silence. Yellow lights, silent street. Nobody and nothing. Absence of movement. I kept wondering when he was going to pick me up again.

Why wasn’t he coming?

I just wanted to go home. The yellow lights kept trembling out there on their own, at their own pace.

Everyone else was asleep, unbothered.

It was so easy to leave me. Let me become someone else’s problem.

What was out there? That was so powerful and beautiful, that he couldn’t resist it?

There was always someone else to take care of me.

It was a heavy unwanted suitcase.

I don’t remember crying that night.

Just a feeling that I wasn’t welcomed.

It was easier to ask other people to mind me for a while.

It happened so many times. Sometimes there wasn’t even an adult there.

I was a suitcase everywhere we went. Not a child, a case.

The terrible suitcase that needed to be dropped off as quickly as you can.

I remember feeling grateful toward those adults who agreed to take care of me for a while. Even if I wasn’t their child.

Why did you fight for me, only to abandon me as soon as you could?

It never made sense.

I read about dad’s figures in books, and it made me feel better some good one existed, and that some people were lucky enough to call them “my dad”.

I never had a dad.

And not because I didn’t want one, but because a dad doesn’t drop you off at a mate’s house at 11 pm at night. Like you drop off a suitcase.

A dad won’t let things like these happen to his child.

A dad doesn’t threaten to sue you.

I wondered for so long how could he live with himself. With his conscious.

I decided he simply doesn’t have one.

All the Barbies he bought me could have never been enough to fill the void I still live with. That hole he left behind.

I think about people’s opinions, they really wanted to let me know what they thought. It hurt me in the beginning until they finally just started to be words I did not care about.

Try getting dumped at someone’s else house in the middle of the night, pink PJs on, blonde curly hair, a comfort blanket in hand, like you’re a random suitcase.

If that doesn’t generate a trauma in you, I simply bow down, I promise. 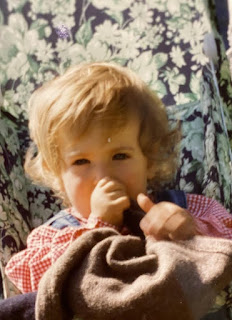