I must say, like everyone else, I have been obsessed with the reaction to Netflix’s Wednesday. From the endless quotes to that dance scene, it’s a veritable cultural phenomenon; and, like any cultural phenomenon, fashion is already starting to take note.

“But how?!” you cry at your screen! To that, I say two things. First, look online and you will see ‘Wednesday Chic’ (unofficial name, I’ll explain my theory later) exploding everywhere. The iconic double plaits, eyeliner, collared dresses, hoodies over striped tops and classic all-black uniforms have all taken over our feeds. Second, this just an article so you probably want to stop yelling at your screen. 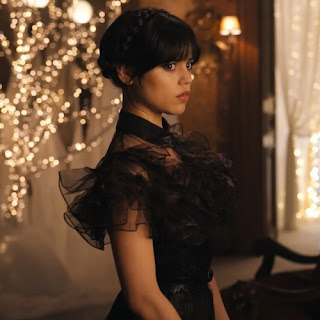 I have dubbed the specific mix of 80’s goth and current grunge styles that this show champions, ‘Wednesday Chic’.

My main reason is that it’s a very different look to the ‘Goth Archetypes’ most people know. It’s a little more structured and standard than 80s trad-goth styles, which came from people shifting 70s punk rock fashion into more stylised and darker forms (see Siouxsie Sioux, Robert Smith, Dave Vanian). But, it still doesn’t feel wholly modern. The fashion of ‘Wednesday Chic’ has a slightly vintage twist, which obviously comes from the original Addams Family series, which aired in the 1960s, and from Wednesday’s director, Tim Burton, whose career arguably encapsulates the 1990s.

The fashion shown in the original Addams Family comes from the fashion of the 1950’s and 60’s, obviously, as shown in the long, dark dresses worn by Morticia, which are reminiscent of noir femme fatales, and the collared dresses worn by Wednesday, which take a darker twist on the mod styles made popular in the 1960s. These styles are constantly coming back into style as seen in the recent ‘Dark Feminine’ trend, and the resurgence in 1960s casual fashion. 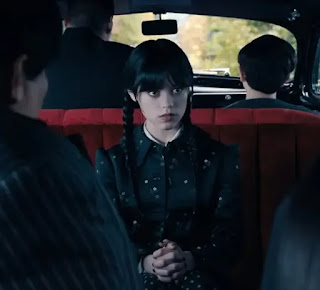 I also have a prediction to make: We will see plenty more of these styles becoming popular.

We’ve already been seeing a massive resurgence in goth styles, not to mention the ‘RAWing Twenties’ for the resurgence of scene and ‘indie sleaze’ fashion.

Tim Burton is a name that has become synonymous with interesting, dark styles. We can see this specific gothic style coming into fashion every time there’s a buzz around the name.

The styles shown in Tim Burton's past work are gothic in a different way than is typically wearable. In Wednesday, the fashion is often more toned-down than the outfits shown in that of Edward Scissorhands, Beetlejuice or Alice in Wonderland, which is perhaps why the styles have become mainstream at such a fast rate.

This style also seems popular amongst different groups regardless of distinctions that often make aesthetics more exclusionary. With ‘Wednesday Chic’, most people already have the clothes needed to achieve the style, and, if not, you can go to almost any shop and find the staples. A dark blazer, skirts, big jumpers and some eyeliner. 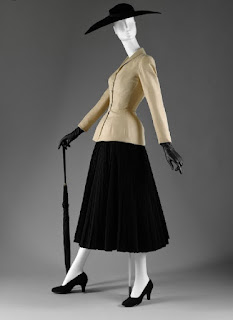 However, we still have the theatrical looks, especially in the show's most famous scene. That dance scene. The dress is reminiscent of 1980’s goth fashion with a slight twist that almost mirror’s Dior’s “New Look” collection, giving it a vintage twist. We should definitely be prepared to see more of these silhouettes coming through in current fashion, and it mixes incredibly well with the grungy styles we’ve already seen become popular. 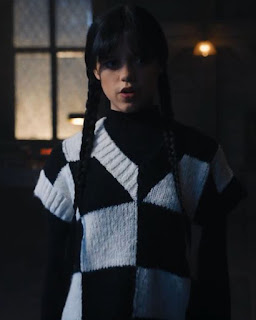 Overall, this gothic grunge style could become incredibly popular in the newest trend cycle. We’ve seen similar looks come through in high fashion, especially in the 1990’s and 2000’s, with choker necklaces, slip dresses and all lace everything.

However, we’re also seeing more inclusive takes on this look, a change that can only be a positive. Plus, we’re seeing extensions from this base ‘goth-grunge’ style. Look at the darker interpretations of fairy-core aesthetics, which often mix the more theatrical elements with comfortable streetwear, think long dresses with big hoodies.

Generally, we are seeing a massive revival in these aesthetics, and it’s only a matter of time to see how the societal impact of Wednesday affects the popularity of these different mixes of generalised fashion styles.