Schiaparelli kicked off Paris Haute Couture Week on Sunday (Jan 22nd) and yet has already stolen all of our attention. 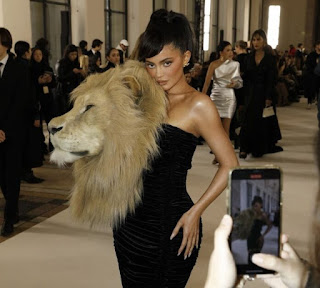 Each crystal was applied by hand by Pat McGrath and her makeup team, taking almost 5 hours to complete. Dressed in red silk faille bustier and hand-knit skirt of lacquered wooden beads, the monochromatic look paired with McGrath’s talent was something out of a sci-fi novel - and we’re here for it.

Although the singer made quite an entrance at the show in Petit Palais, this is just the beginning of everything the Schiaparelli provided.

This year alone (and we’re only 24 days in), Creative Director, Daniel Roseberry, has already grabbed our attention with his styling of celebs including Rihanna at the Golden Globes in a custom oversized opera coat, Julia Roberts at the Critics Choice Awards in bespoke embroidered sun rays, Kendall Jenner at Beyoncé's Atlantis performance in Dubai in a chain-linked, lip-bedecked halter-neck dress, and Hailey Bieber in a giant gold-belted jumpsuit at the launch of OBB Studios in Hollywood. All of which have taken over our feeds. 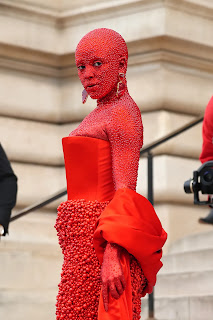 The exhibition at the Musée des Arts et Décoratifs in Paris has drawn thousands of fashion praisers and, over in London, the first floor of Harrods now houses a permanent UK flagship Schiaparelli boutique - a first for the historic house. Is 2023 the year of Schiaparelli?

Roseberry's trailblazing enthusiasm for outrageous extravagance is providing inescapable fashion on a global level - just as founder, Elsa Schiaparelli, created the stylish establishment with her ground-breaking glamour almost a century ago.

The Schiaparelli collection featured fake taxidermy pieces that went immediately viral online, including the 'leopard' that leapt from Shalom Harlow's chest and the 'wolf' that stared from Naomi Campbell's coat. It was predictable that they would immediately take on a controversial existence on their own.

Cleverly planned to get us talking, the 'Lion' head worn by Irina Shayk on the runway could also be seen on Kylie Jenner in the front row - twinning! 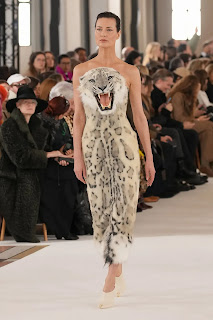 Roseberry does not require bold and bright colours to draw us in. Instead, the hues of choice remained muted and chic, allowing attention to be focused more intensely on his craft and detailing.

Schiaparelli helped popularize the sensationalised silhouette (massive shoulders, tiny waist, and wide hips) in gowns, dress coats, and tuxedos, whilst all being in champagne tones, earth tones, and black. Roseberry had stayed true to the brand whilst bringing it a new lease of life through this collection.

A show full of monsters, we saw a black snake hemming the neckline of a cream tweed jacket, a snow leopard's roaring face serving as the focal point of a strapless fur gown, and, in the penultimate look of the show, a black wolf peering menacingly from Naomi Campbell's collar bone. There was no harm done to any animals, so don't be alarmed. These foam forms are just incredibly lifelike.