Lady Diana of Wales was and continues to be one of Britain’s most beloved icons. An outspoken advocate for human rights, she used her fame on multiple occasions to raise awareness for HIV, homelessness, and leporsey, among many other things. Though she died 25 years ago, ‘Dianamania’ seems to have made a comeback, arguably due to media portrayals in The Crown and Spencer, even being referenced on the cover art of SZA’s most recent album, SOS.

Now, this obsession is where Kim Kardashian enters the narrative. By wearing the dress of the late Marilyn Monroe to the MET gala, and purchasing Michael Jackson’s hat and jacket for her daughter, she has already proved herself to be a collector of the goods of deceased celebrities. Most recently, Kardashian has taken it upon herself to purchase a necklace that Diana has previously worn.

The Attallah Cross is incredibly opulent, an enormous amethyst cross embellished with small circular diamonds - and cost a whopping £163,800 (around $200,000). 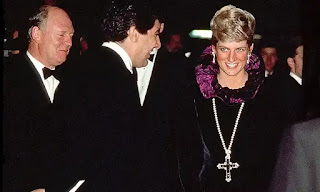 "We are delighted that this piece has found a new lease of life within the hands of another globally famous name," Kristian Spofforth, head of jewelry at Sotheby’s London auctions, said in a press release.

This statement, to those who know anything about Lady Diana, is a touch ironic. Not only was Diana tormented by her role as a “globally famous name” (both by the Royal family and the media), but her status is what ultimately killed her. After all, if she had not been killed in a car accident while literally fleeing the paparazzi, she may still be her today. 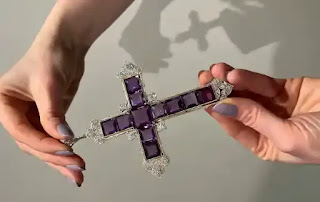 While Kardashian is undoubtedly complicit in this disrespectful act to some degree, it must be admitted that Lady Di’s jewellery and clothes are still being pawned off to whoever will take them. In other words, there will always be people feeding off her reluctant celebrity status. Kim just happens to be one of them.

While the everyday person most likely does not have enough money to significantly contribute to the conversations surrounding these artifacts, it is still possible to view this system with a critical eye. Maybe it is time to start questioning institutions such as Soethby’s, which has never hesitated to sell, regardless of if they should. Last November saw Julien's Auction house host an auction of Amy Winehouse's personal possessions including a vast amount of intimate items: underwear. Notebooks and infamous outfits are one thing but bras and heirlooms are quite another. Why have these companies been empowered to run such a disrespectful market for so long? When does our fascination with celebrities go too far?