The past 5 years have belonged to men’s wear. With small doses of gender fluidity becoming more socially acceptable to the mainstream, strides have been made for masculine clothing as the rules around it become less rigid.

However, while pearls, florals, painted nails, and flamboyant colors have made a splash, it seems that feminine clothing needs a new look. While most of these looks feel tired, 2023 could easily be the year that women’s clothing finds a new edge. 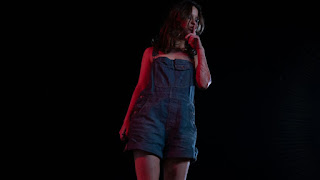 Strangely enough, a lot of the media that has been making the biggest impact has been on the creepier side. After all, the standout costume for 2022 was Maxine Minx from the X franchise with Pearl as a close second. The reason for this could be because of the way both girls fit the archetype of “beautiful girl unhinged”, something that seems to resonate with the modern woman. Wednesday Addams too, who recently got her own series, exemplifies this trope, though in a far more calculated way. With the new 20’s already starting to become the age of anxiety, 2023 could become the year where feminine fashion becomes a touch darker. Are you ready for the goth revival? With Bring Me the Horizon’s iconic album, Sempiternal, turning 10 this year, it seems rather fitting. 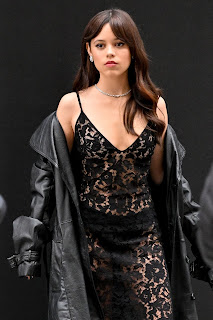 The bold tulle dresses worn on the red carpet that were once cutting edge now seem tired. While Euphoria created interesting new directions for makeup, the outfits lacked newness - yes, this applies to every character.

With stand-out looks from Wednesday having made waves on platforms like TikTok, as well as the “I’M A STAR” scene from Pearl, it is easy to imagine creepy dark-colored frock-style dresses becoming fashionable, perhaps worn with galoshes or work boots.

And, what’s more gothic than lace? Back in October, we saw Wednesday star, Jenna Ortega, attend a Valentino Show in Paris dressed head-to-toe in black lace. While embodying her Netflix character’s fashion off the screen helped to promote the show, it’s also began to influence the styles we’re seeing on the street. Ortega seems to have resinated with young people everywhere and I can only see her influence on youth trends increasing this year.

IN: Hairstyles with tight middle part / OUT: Loose flowing hair 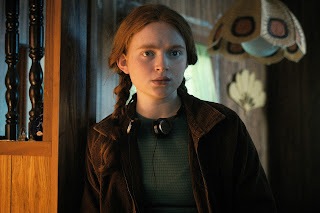 Wearing two tight braids, infamously linked to Wednesday but also also seen by Max of Stranger Things, could make a rather successful comeback. Harsh middle partings will pave the way in 2023, showing more structure and thought than usual loose following hair from the trends from the past few years.

IN: Basket ball shorts / OUT: Athleisure 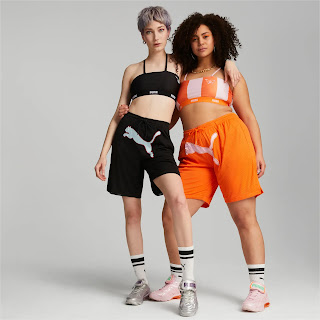 Vogue’s Instagram also shows signs that sportswear could be in the cards as well. A post from December features a model strutting down the catwalk in a stylised jockey coat and hat. Another highlights Parisian street fashion, where a young woman is seen wearing a fencing jacket and pencil skirt. Additionally, we have seen models like Bella Hadid wear Adidas and football jerseys, and tennis star Serena Williams featured in VogueWorld.

Additionally, with World Cup being quite the hot topic this December, especially Argentina’s win, this may be the year where ahleisure and gym culture finally take a step back in favor of aesthetics that revolve around organized sports.

While this does not fit with the concept of the “beautiful girl unhinged”, it is also true that people are getting excited about being able to not only participate in sports but enjoy participating with others. The public is warming up to the comradery that comes with athletic competition, and this could manifest itself in a new and improved sports chic.

IN: Bold colours (especially headwear) / OUT: Minimalism a la Yeezy 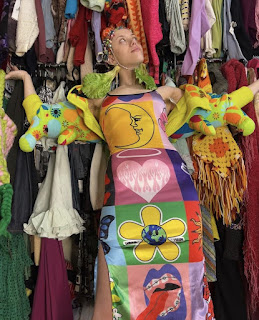 TikTok trends, admittedly, have the world in a chokehold. However, with the fast-moving microtrends that come and go, one thing has stood out; a trend toward maximalism. Influencers such as Clara Perlmutter (@tinyjewishgirl) and Mrya Magdalen (@myramagdalen) pile on loud colors, bizarre patterns, and crazy accessories in a way that somehow just works. Additionally, Vogue has predicted that bright hair colors may become mainstream, which would add a new layer to the trend.

For femme-presenting people, maximalism is a refreshing break from looks that prioritize palatability. It invites the wearer to be sexy on their own terms, have fun above all else and be absolutely true to themselves. The philosophy of these assembles lies between the intense horror-inspired looks and sportswear chic (and in fact, could have components of both): manic but optimistic. 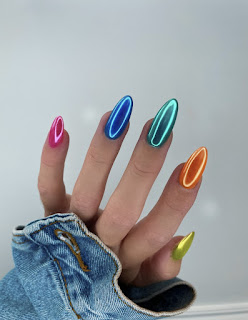 While bright colors and bold patterns have been a part of everyday fashion for a few years now, 2023 may be the year those concepts manifest themselves in our nail looks.

Vogue has predicted that bright hair coloure may become mainstream, specifically in multicoloured, science fiction-inspired looks and with a new Hunger Games movie due to be released this year, it definitely makes sense.

Also reminiscent of science fiction movies, according to Harper’s Bazaar, we are already seeing chrome and metallic nails (as seen on Dua Lipa and OPI ambassador Harriet Westmore) have their moment. Bright colors have been on trend for a while, and with no sign of them going away, it is easy to imagine new ways for them to be incorporated into day-to-day life. Additionally, with the way professional dress codes have changed over the years, unnatural hair colors and bold nail looks have become more commonplace. 2023 could easily be the year that bolder beauty looks start to become more acceptable in office spaces.

While influence in fashion comes from various places, the biggest sources of inspiration are ultimately the emotions being felt. This decade is only beginning and already there is a sense of uncertainty, like we are all collectively holding our breath to see what insane events will happen next. Sometimes the future seems so scary it makes us want to devolve into insanity, but sometimes life feels promising. But as for what really will happen, in fashion and life, only time will tell.